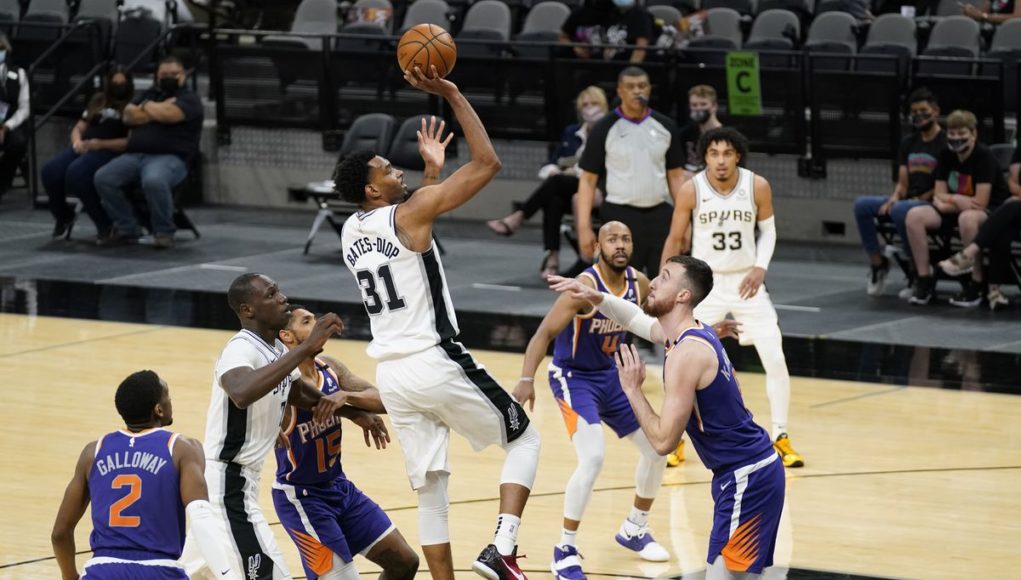 SAN ANTONIO — The San Antonio Spurs closed out the regular season with back-to-back losses to the Phoenix Suns over the weekend, now setting their sights on the Play-in tournament for the chance to return to the NBA Playoffs.

The losses see San Antonio close out the condensed 72-game 2020-21 season as the ninth seed in the Western Conference with an overall record of 33-39. The Spurs went 14-22 inside the friendly confines of the AT&T Center while going 19-17 on the road.

In case you missed it, here’s a recap of the weekend’s games:

The shorthanded Spurs opened their weekend slate with a 140-103 blowout loss to the Suns on a rainy Saturday afternoon in south Texas.

As a result, the game was ugly. The Spurs never led in the game while Phoenix held a very comfortable 42 point lead at one point. The Suns led 34-17 after the first quarter and never looked back as they moved within a game of Utah for first in the West.

“Phoenix was professional in their approach & that was the avalanche,” Acting Spurs Head Coach Mitch Johnson said.

Devin Booker had 27 points for Phoenix and Mikal Bridges had 18 points. Chris Paul added 16 points and 10 assists in 25 minutes.

The Spurs were led by Keldon Johnson’s 18 points and Drew Eubanks added 15 points.

“No matter what we were down, 10, 20, 30, at the end of the day, we were still trying to chip away,” Spurs forward Devin Vassell said. “Never giving up on defense, making sure we were trying to get stops, playing with energy. That’s what we try to pride ourselves on.”

The Spurs closed out the regular season with a narrow 123-121 loss to the Suns on Sunday afternoon. Popovich returned to the bench while the Spurs’ veterans returned and played limited minutes.

San Antonio’s young players got the chance to shine in the game and nearly gave the Spurs a win to close the campaign. DeRozan led the way for the Spurs with 23 points and Poeltl added 17 points and 10 rebounds.

Keita Bates-Diop tipped in a missed free throw from Tre Jones to give the Spurs a 121-120 lead with 9.4 seconds remaining but E’Twaun Moore’s three-point was the difference for Phoenix.

“We wanted to get a good workout, conditioning-wise because we’ve got the 2 days off, get some rhythm for Jakob, Dejounte and DeMar,” Popovich said. “So I think we got those two things done. And then don’t get anybody hurt.”

Now, the Spurs will focus on the Play-in tournament and control their own destiny to make the playoffs.

“Whoever we are facing we can just go out there and play free, give it our all. It’s just 2 games to get into the playoffs,” Poeltl said. “It’s far from an impossible task. It’s going to be tough, no question, but we are definitely capable of doing that.”

The Spurs will now head to Memphis to face the Grizzlies at the FedEx Forum for the Play-in game. The winner will go on to take on the loser between the Golden State Warriors and the Los Angeles Lakers/Portland Trail Blazers.