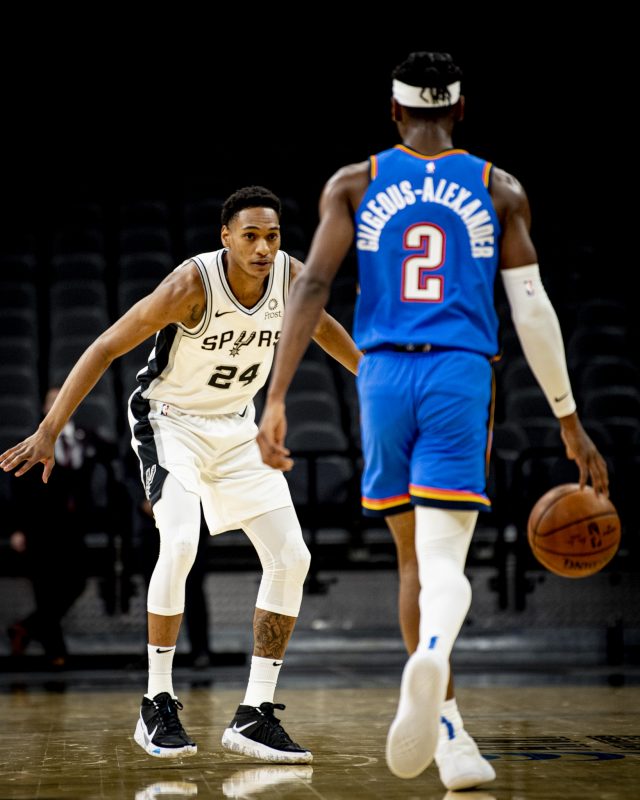 “Devin I’d say has stood out the most to me just because he’s stayed in San Antonio the longest,” said Eubanks. “I’ve been around Devin probably the most this offseason. Just the way he can finish inside. He pulls up, his mid-range is automatic. He’s just able to knock it down. He’s got his long arms to shoot over big guys, so, sometimes when I see him coming off a pick and normally we want to give that up (the mid-range), but with Devin it’s tough because he’s a knock down shooter from the mid-range and he can get to the glass too and finish. He’s probably the one guy I’ve noticed out of everybody. Everybody’s improved, but for sure Devin.”

Vassell showed some of that improvement in scoring out of the pick-and-roll during the Summer League back in August. In four games between the Salt Lake City and Las Vegas Summer Leagues, Vassell averaged 16.5 points and 1.3 assists.

Vassell was able to run more pick-and-roll sets and he showed the ability to drive toward his spots in the mid-range and pull-up if the defense went under on his screens.

When asked about Vassell’s increased opportunities at Summer League back in August, Summer League Head Coach Mitch Johnson said, “I think part of it is you’ll see what I see,” before Vassell even played in a Summer League game. “Part of it is to give the players the ball and dictate how far that role can go.”

At Summer League, Vassell got to see how defenses started to cover him differently in the pick-and-roll and he welcomed the challenges the defense brought toward him as a learning opportunity when he struggled.

“At the beginning, they were just dropping. As you’ve seen, I was just getting to my mid-range. After a while they started blitzing and switching, which is great because honestly there’s not going to be one team in the league who just stays doing one thing. Being able to see that and being able to adjust to that and still being aggressive and still being able to make plays, like I said before in the last interview, I’ve been working a lot on my ball handling and getting to my spots. I think that last game, I probably didn’t shoot it the best that I’ve shot it, but I think you all are seeing now that yeah, ‘he can get to his spots. He knows how to get there,’ and that’s what I want to keep improving on.”

Vassell also added the hesitation dribble when driving to his offensive skill set. This was something he displayed in Summer League as well, with the ability to get his defender on his hip.

“Yeah, I mean you’ve got to play with pace. You’ve got to be able to see the reads and keeping him on my hip really gives me the ability to rise up or just kind of slow everything down and I think that was one of the biggest things today,” said Vassell then. “I think my first couple of times I came off a screen, I had him on my hip and I was able to get to my mid-range, able to get to my pull-up and you know once that started happening, they had to change the defense. I worked on a lot of stuff over the summer, I don’t want to spill all the beans. I think ya’ll are seeing some of the stuff right now.”

We’ll now see in the coming weeks if the Spurs are ready to give Vassell a bigger role in the offense and allow him to run more pick-and-roll, like Eubanks says he’s been doing effectively in training camp.