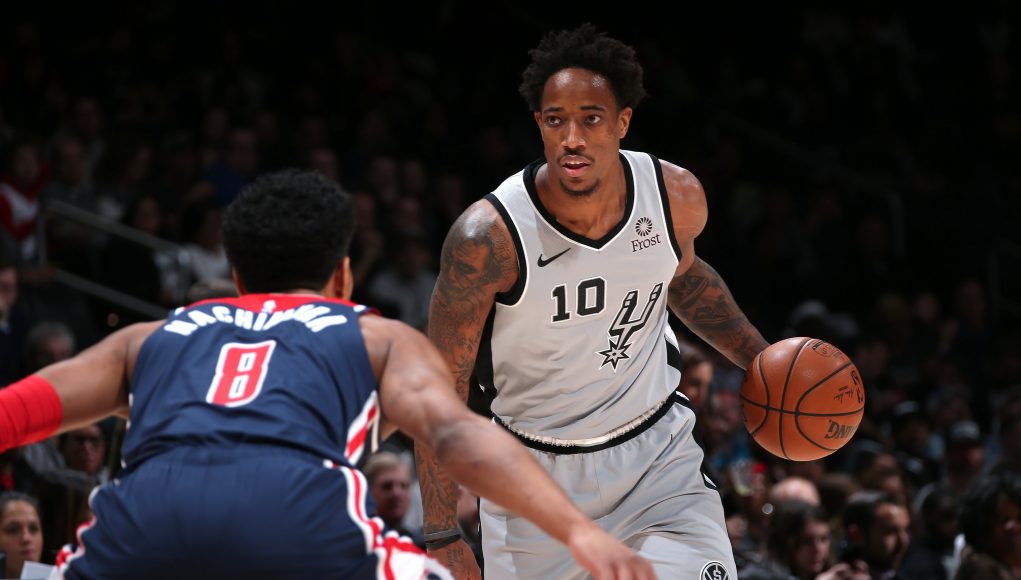 Despite making a lineup change, the San Antonio Spurs fell 138-132 to the Washington Wizards (4-8) at Capital One Arena on Wednesday night.

The loss is the seventh straight for San Antonio, their longest since 1996-97. Spurs Head Coach Gregg Popovich inserted Patty Mills and Jakob Poeltl into the starting lineup, replacing Dejounte Murray and Trey Lyles. Even then, the Spurs’ lack of defense was too much to overcome the hot shooting of Washington.

“You know, we started out better [and] that’s what we wanted to do,” Popovich said. “That worked very well.”

Here are three observations from the game:

It looks like Trey Lyles is about to get garbage time duty if Wednesday’s game is anything to by. The 24-year-old came off the bench but only played six minutes. He did not score but grabbed four rebounds in his short stint.

You could tell the difference right away with Poeltl on the floor next to Aldridge in the starting five. He and Aldridge found each other down low in the post and the offense overall looked more in sync with him with the starting unit. Poeltl had 11 points, five rebounds, and two assists in his first start of the season. Rudy Gay played 28 minutes, scoring 18 points.

If Poeltl and Gay can bring that kind of production every night, Lyles may not see the floor until a blowout comes and it may make San Antonio better in the long run. At this point, it can’t get any worse.

Pop’s decision to inserted Mills and Poeltl into the starting five worked and may the key to ending this losing streak if they can’t find a way to get things going on the defensive end. Mills and Bryn Forbes looked like a defensive nightmare but the pairing worked out very well. Offensively, the pair combined for 35 points and went 7-for-15 from three-point range. Defensively, Mills drew two charges on Bradley Beal in the opening quarter and was aggressive.

DeMar DeRozan had 31 points and shot 70 percent from the field. As mentioned, the DeRozan-Mills-Forbes trio can get you points all day, every day. The main problem is that is a bad lineup for defense and that is the next issue Pop will have to look at.

When you lose seven straight games, anything goes when it comes to who takes the floor. Marco Belinelli has had his fair share of struggles to start the season but he had his best performance on Wednesday, scoring 10 points in 13 minutes. Belinelli played just two minutes in the second half as DeMarre Carroll took his place. Carroll went scoreless but contributed nicely on the defensive end.

At this point, it looks like Pop will try any combination to see what works to break his guys out of this losing streak.

The Spurs are now 5-10 on the season and will return to the court on Friday when they travel to face the Philadelphia 76ers (9-5) at 6 p.m. from the Wells Fargo Center.