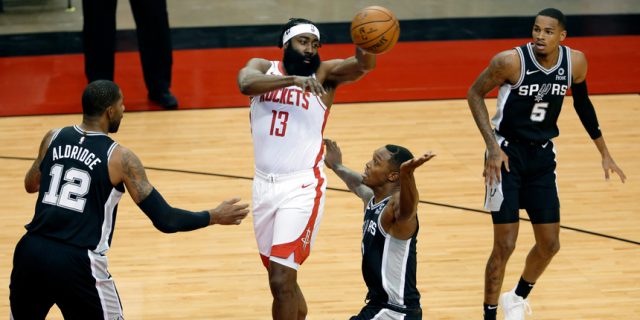 The San Antonio Spurs fell to the Houston Rockets 112-98 at the Toyota Center on Tuesday night in their penultimate preseason game. Derrick White, Keldon Johnson, and Quinndary Weatherspoon all remained out for San Antonio with their respective injuries.

Here are the following topics we’ll be discussing in this wrap-up of the second to last preseason contest:

One of the bright spots through the first two preseason games is the play of rookie Devin Vassell out of Florida State. On Saturday, he had 12 points, 6 rebounds, 3 steals, 2 assists, 3 fouls, and 1 block in 25 minutes in San Antonio’s preseason opener.

Vassell followed that up with 11 points, four rebounds, and four steals while shooting 50 percent from the field in 31 minutes of action.

“I’m really just trying to use my instincts,” Vassell said after the game. “I’m reading, seeing where to go. I use my teammates to tell me where to go. At Florida State, we were always taught to leave our hands up.”

The rookie was aggressive on both ends of the court, grabbing a steal and finishing on the other end in the second quarter. That alone made a big impression on his head coach.

Speaking of aggressive play, Lonnie Walker IV is coming off his breakout season in the bubble and looks to expand on that in the 2020-21 season. He got the start on Tuesday night after playing just 13 minutes in the first half of Saturday’s preseason loss to the Oklahoma City Thunder.

Walker IV played 26 minutes on Tuesday, finishing with 17 points on 54 percent shooting, two steals, and went 3-for-7 from beyond the arc. The former Miami Hurricane has been recovering from a back injury over the last two weeks.

However, Tuesday night he looked sharp and was aggressive in getting to the rim, something the Spurs need in this new era of basketball. Walker IV was not only aggressive on the offensive end but defensively as well, something Popovich loves.

“He was very aggressive attacking the bucket,” he said. “Playing some pretty good individual defense.”

The Spurs have made a commitment to shooting more three-pointers this upcoming season and that is going to be a work in progress as the season goes on. LaMarcus Aldridge attempted 10 shots from beyond the arc on Saturday, a new career-high for him.

Tuesday night saw San Antonio shoot 32 percent from three-point land (10-for-31) with Walker IV making 3-of-7 attempts. That’s on par with how the Spurs fared in the bubble but Popovich would like to see those numbers go up.

San Antonio shot 38 percent of their shots from three and with more games, the more likely those shots will fall and the club will be more comfortable in this new system Coach Popovich is putting together.