With their second round selection in the 2010 NBA Draft, the San Antonio Spurs drafted Ryan Richards. A 7’0″ big man out of England. Fulfilling a well-known expectation of the Spurs to draft overseas players, Spurs’ G.M. R.C. Buford and company chose a relatively unknown commodity by selecting Richards. Though unproven, it seems many of the experts like what they see.

Richards hasn’t played much professional basketball in Europe. At 19, his resume includes two years in a Spanish amateur league, a year of professional basketball in Belgium, and six games with BBC Monthey in Switzerland. In those six games he averaged slightly more than 13 points per game on 56 % field goal shooting and, get ready for this Spurs fans, 91.3% from the free-throw line.

Here is how one NBA scout, according to SI.com, described him: “He’s played in Europe, but not with the big boys.”

I doubt the Swiss would argue with such an assessment.

He is left-handed with a reach of over nine feet. He has shown the ability to shoot with both hands, but has very little lower block presence for a big man. He has been most effectively utilized as a power forward in pick-and-roll or pick-and-pop situations and has the ability to face up with big men on the perimeter a la Chris Bosh or Amar’e Stoudemire. He has impressed in pre-draft camps and workouts with a style that is unlike most big men in the NBA.

Still, there are concerns. He is young (19 years old) and has very little experience. He does not bang around inside, bringing into question his defensive capabilities in a much more aggressive and physical NBA style of play.

There are also durability questions. 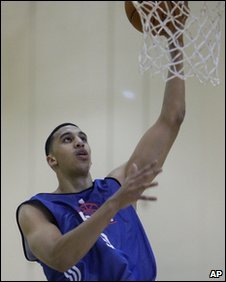 knocked out of pre-draft camp early after banging knees with a player. Richards has this to say about his shoulder:

It is fine,” Richards said. “I saw four or five specialists who said no surgery, three months rehab, so I am still actually doing the rehab now just waiting for the draft to finish so I can really get in the gym. I don’t want to work out too much than tire my body out and then get in the gym for these workouts.”

By all accounts, his draft stock rose substantially after his performance at the 2010 NBA Draft Combine in Chicago. There is no question that many NBA scouts see Richards as a player with an enormous amount of potential if he is developed in the right system and I don’t think anyone would question Pop’s ability to develop unknown players into successful NBA stars. No doubt the eyes of England will be upon him and the Spurs as he makes this transition.

Still can a 19-year old from the amateur leagues of Europe with a history of injury problems possibly be ready for NBA basketball? Richards seems to think so:

“I play with a lot of NBA guys in the summer, I play with the top guys in Europe, in the D-League, so I’m not really worried about playing at this level,” Richards said. “I am learning a lot how to defend in the NBA. In Europe the court is a lot smaller so you can get a lot more help. After playing today and some of my other workouts, you can see that you have to play man-to-man defense.

“I just think I am a quick learner. This is the best league to learn how to play here.”

He definitely brings the confidence. Who does Richards think he best compares to? Only Lamar Odom and Chris Bosh. I hope he’s right.