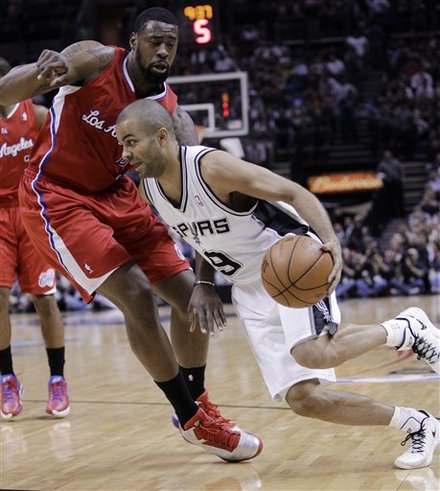 While the Clippers made a big run at the end of the first quarter and into the second to stay within arm’s reach of the Spurs. The Clippers went on another run in the third quarter. A Blake Griffin made jumper would pull them within thee, but Spurs guard Danny Green, who has made seven three-pointers through the first two games of this series, knocked down a pair of threes to lead the Spurs on a 13-2 third quarter run.

On his 30th birthday, Tony Parker had a much better Game 2, making aggressive drives into the paint and dizzying his defenders on his way to a 22 point, 5 assist night. Parker’s counterpart and fellow MVP runner-up, Chris Paul, continued to struggle while being defended y several players all night, including Parker.

“I thought Tony played very, very aggressively and really focused knowing full well he was going to get hit, he was going to get doubled and so on and so forth,” Spurs coach Gregg Popovich said. “He welcomed it, played through it and did one heck of a job.”

Paul Garcia previewed Game 2 on Project Spurs yesterday, and he got about as close as you can get in his prediction.

I expect a much more aggressive Parker…to come out in game two. As Duncan said, this Clippers group will come out with a ton of energy, the Spurs will want to try to get them into the “catch-up” game early, so San Antonio can impose its will on the Clippers. So long as the Spurs limit their TURNOVERS, continue to share the basketball, continue to play team defense, and get an aggressive game from Parker, I expect a 15-18 point win for the silver and black, and a 2-0 series lead when the night is over.

“He is a very smart basketball player. I said this about him all along. You play the way he does, it is easy to fit in. He is unselfish. He understands what we want to do. Defensively, he is solid. He can pass the ball better than many of the big men I have ever played with. He shoots the ball. He is starting to shoot the ball and gets his confidence in that respect. You put all those things together and he is just a great addition to our squad.” – Tim Duncan on Boris Diaw.

7 of 7 – Boris Diaw’s shooting percentage from the field
18 – Turnovers for the Clippers (8 by Paul)
1 – Rebounds by Blake Griffin
4 – Eric Bledsoe’s point total just one game after scoring a team-high 23 points.
16 – Paul has just 16 points total through two games, four fewer points than his per game scoring average this season.

Through two games, Diaw is averaging 11.5 points, eight rebounds, 4.5 assists and 1.5 steals per game. He’s made all but one of his three-point attempts and is shooting at a 62 percent clip from the field.

While Kawhi Leonard didn’t contribute as much offensively as he did in Game 1, he found a way to mane an impact on the game, finishing with five points, six rebounds, two steals and one blocked shot.