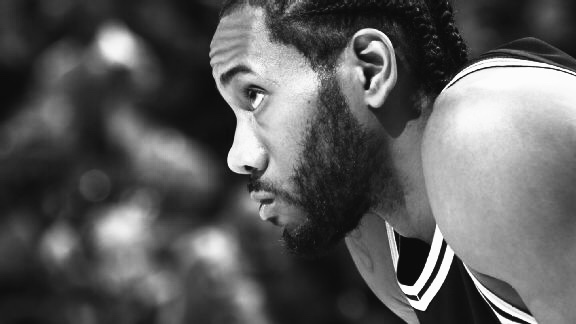 The expected 1-on-1 sit down meeting that was supposed to take place between Leonard and Spurs Head Coach Gregg Popovich apparently hasn’t happened, and now the clock is ticking for the Spurs to decide if they want to still try to find some way to fix the relationship with Leonard, or seek most likely the best trade package they can get for him with Thursday’s NBA draft on the horizon.

There are seven teams who will have interest in Leonard according to different reports, and those teams are the Los Angeles Lakers (who Leonard reportedly has as his first choice), the Clippers, the Boston Celtics, the Sacramento Kings, the Philadelphia 76ers, the Cleveland Cavaliers, and the New York Knicks.

Now, as many other media outlets have already started doing, let’s look at some trade proposals in the event Leonard and the Spurs couldn’t fix their relationship and San Antonio had to trade him. Trade proposals will be suggested for each team. The first will be the Spurs’ first offer I think they should ask for, and the second will be the offer after both sides go to negotiate. It’s also important to keep in mind that some teams that want Leonard may not put their best offers forward because he can threaten not to re-sign with them after the 2019 season.

Writers Disclaimer: These trade proposals are ideas I’m looking at to make deals that might be equal for both sides. They’re just suggestions, not actual proposals coming from the teams.

Who says no? Boston most likely. By all indications, at this point, Tatum is basically off the table in any trade negotiations, especially with a risky move for Leonard, who can say he won’t re-sign with Boston long term.

Who says no? This one looks a bit more realistic for both sides unless Boston wanted one of Rozier or the Kings’ 2019 pick pulled from the deal.

The Celtics add Leonard to a team with Tatum, Kyrie Irving, Al Horford, and Gordon Hayward. The Spurs get Brown who has an unknown ceiling, plus the Kings’ pick which could once again be top-10.

Proposal from former league executive: According to former NBA executive with the Phoenix Suns Amin Elhassan of ESPN, he proposed Kyrie Irving and the Celtics’ 27th pick for Leonard.

The Spurs might be intrigued by this offer to build a new core around Irving and LaMarcus Aldridge. Irving would have the choice of becoming a free agent next summer, but the Spurs could re-sign him to a 5-year extension because they’d acquire his bird rights in a trade. For the Celtics, it wouldn’t be too risky either because there’s no guarantee Irving was going to sign long term with them after next summer and the same could be said for Leonard in Boston.

For the present, to keep the Spurs as one of the top five teams out West, this move would help, but it still wouldn’t make them a contender. Irving is also 26 years old, so the Spurs would have to operate over the years trying to find that third star to pair with Irving and Aldridge.

First proposal: Spurs ask for the second overall pick (could be Luka Doncic), Bogdan Bogdanovic, Willie Cauley-Stein, and Buddy Heild. The Kings would get Leonard.

This might be asking a lot from the Kings, but it never hurts to ask.

This is probably more realistic for both sides to find an agreement. As the Ringer’s Bill Simmons mentioned Friday, next season the Kings have no incentive to tank because their pick is going to end up in Boston, if Sacramento drafts in the 2-30 range. So, why not risk one season of Leonard to try and earn a playoff spot again if you’re the Kings? There were also prior reports that the Kings were looking to trade back further in the draft even before the Leonard news broke.

First proposal: Spurs ask for Robert Covington, Markelle Fultz, Dario Saric, and the 10th pick in the 2018 draft. The Sixers would take back Leonard and Patty Mills.

Because Leonard could say he won’t re-sign in Philly long term, the Sixers will probably say no to this offer, especially since they’re also taking back the three years Mills still has left on his deal.

Second proposal: Spurs ask for Covington, Fultz, and the 10th pick. The Sixers would receive Leonard and Derrick White.

This looks more realistic for both sides because the Spurs are getting a player with an unknown ceiling level in Fultz for their future, plus the 10th pick. This would be a bit risky for Philly since there’s no guarantee Leonard stays after this coming season, but, he does have experience working with Brett Brown.

First proposal: The Spurs ask for Tobias Harris, the Clippers’ 12th and 13th picks in next week’s draft, and the Clippers’ 2020 or 2021 first round pick.

There may not be any objection from the Clippers, but for the Spurs, it seems like that’s not enough for Leonard. If the Spurs have the intention of packaging the 12, 13, and their 18th pick together for a top-5 pick, then this type of deal looks more reasonable. The Spurs would get a proven player coming off one of his best seasons in Harris for next season, while they’d also be getting a top-5 pick who might make an impact next season and for the future.

The risk there again is what is the probability the Spurs can package the three picks together to land a top-5 pick?

First proposal: The Spurs ask for Kristaps Porzingis, Courtney Lee, and the 9th pick in the 2018 draft. The Knicks receive Leonard.

There’s probably too much risk here for both sides. The Knicks would be losing their franchise center in Porzingis for what might just be one year of Leonard, if he chose to leave next summer in free agency. Plus, Porzingis is coming off a season ending injury, so there’s still no clear indication when he’ll even return to the court.

Outside of Porzingis and the 9th pick together, it doesn’t look like the Knicks would have appealing assets San Antonio would consider in a trade for Leonard.

First proposal: The Spurs ask for Brandon Ingram, Kyle Kuzma, and the Lakers’ 25th pick in the draft in exchange for Leonard AFTER July 1.

In order for the Spurs to not have to take on the hefty contract of Luol Deng, they would have to trade Leonard after July 1. This would allow the Lakers to absorb Leonard into cap space, while keeping the cap hold for Julius Randle on the books and enough money to still sign LeBron James. But, this would limit the Lakers’ flexibility to add a third star like Paul George.

According to Kevin O’Connor of the Ringer, the Phoenix Suns are a team that might ‘probe’ the idea of packaging the number one overall pick in a deal for Leonard.

First proposal: Spurs ask for the number one overall pick, Josh Jackson, and Tyson Chandler. The Suns get Leonard.

This might be too steep an ask for the Suns to take, considering the Spurs would be adding a top-5 pick from last year in Jackson with an unknown ceiling, plus getting the option to draft either DeAndre Ayton or Doncic.

Second proposal: Spurs ask for the number one pick, Dragan Bender, Chandler, and the Suns’ 2020 and 2021 first round picks. The Suns get Leonard.

This one might work for both sides. The Suns are taking the risk of having Leonard for one season and him possibly leaving next summer. The Spurs would be able to draft first, either Ayton or Doncic, plus Chandler would come off the books after next season. Though Bender hasn’t made a huge leap, he’s still just 20 years old and will be starting only his third NBA season on his rookie deal. For the long term, having the Suns’ 2020 and 2021 first rounders would give the Spurs the chance to possibly get solid picks at that spot if Leonard left Phoenix next summer.

By the way, O’Connor suggested the number one pick, Jackson, Bender, and the Suns’ 2021 first rounder.

UPDATE regarding Phoenix: The Suns reportedly do not have interest in trading the first pick for Leonard.

According to Terry Pluto of Cleveland.com, the Cavaliers have already made calls to San Antonio showing their interest in trading for Leonard. Now to carry on with hypothetical trade proposals.

First proposal: Spurs ask for the 8th pick in Thursday’s draft, Cleveland’s 2021 first round pick, and Kevin Love. The Cavaliers would acquire Leonard.

If you’re Cleveland, you do this quickly because you’re getting an MVP-level player when healthy in Leonard to entice LeBron James to stay in Cleveland for another season, or, even if James bolts, you can make Leonard the go-to option on your team for at least a season.

The Spurs on the other hand probably don’t feel this trade would be equal to Leonard’s value and if they had to trade with Cleveland, it’s because they couldn’t find better offers with Boston, Sacramento, the Clippers, or Philadelphia, if those teams did indeed conduct trade negotiations. If they had to make the deal happen, the Spurs would get Love, who was an All-Star last season to play alongside Aldridge and who will keep the floor open for Dejounte Murray drives, or Aldridge post-ups. Love would have the option to exercise or decline his player option next summer too. If the trade happened before Wednesday, the Spurs would have the ability to pick who they’d like at number eight. If it happened after Wednesday, then they would acquire whoever Cleveland picked at eight. Acquiring the 2021 pick would be San Antonio hoping that the Cavs didn’t have a successful 2020 season, which would make the pick a lottery pick by that time-frame.