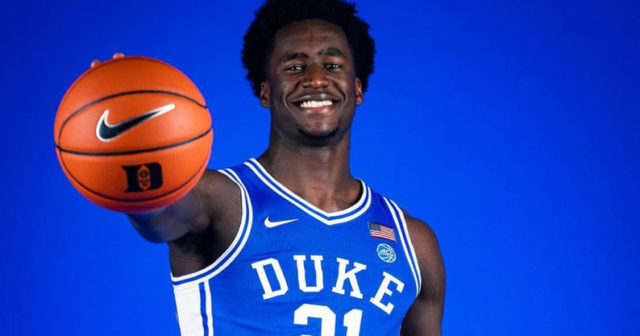 With the San Antonio Spurs racking up some more wins here in the past couple weeks, they are also moving down the draft board. With that movement comes less freedom in who the team will be able to draft.

However, there is a nice wing they should consider in AJ Griffin. While he is still working his way back from an offseason injury, he has looked more like the athlete we expected to see in the last few games he’s played.

Standing at 6-foot-6 and weighing about 220 pounds, Griffin is slightly bigger than his dad who played in the NBA for nine seasons for a few different teams.

He is also an assistant coach for the Raptors so the younger Griffin has some nice pedigree to go along with his actual play. Here are his stats through 12 games so far this season.

While those numbers don’t look all that impressive upon first glance, he has been playing considerably better in the last four games. As a matter of fact, he has been the offensive spark plug the last few games and has shown off more of what people believed to be the skills that would land him in the lottery. He has been better taking defenders off the dribble and can defend one through four.

Griffin has a low center of gravity and is built like a linebacker so he has the strength to finish through contact at times and dribble through defenders when necessary. He’s got a high IQ thanks to his dad and it shows on defense as he gets into passing lanes and cut off drives fairly well.

While the shooting numbers look pretty nice right now, it remains to be seen how they might change with more voluminous shooting in conference play.

He has a quick and compact shooting motion, but could probably benefit from better feet positioning as he seems a bit wide on his shooting stance.

The Duke freshman isn’t super explosive, but is a solid athlete. With more minutes coming his way and the opportunity to show off more of his repertoire, Griffin should find himself getting mocked in the middle of the first round more often.