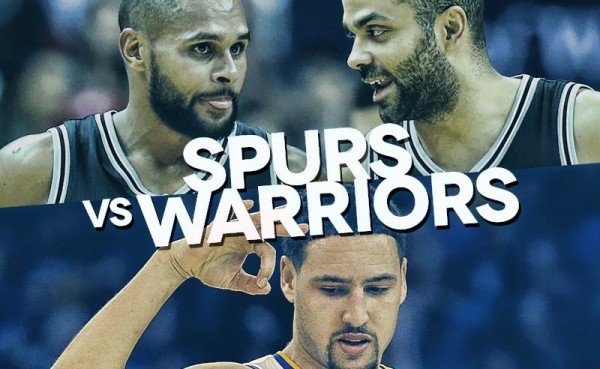 Paul Garcia
Warriors in 6 – The Spurs’ defense should be able to keep them close in each game, but, at the end of the day, it’ll be the Spurs’ offense that ends up being their downfall in the series. LaMarcus Aldridge will see multiple double team schemes, and the question will be which of his teammates help him in the scoring department?

Michael De Leon
I’ve been stuck between five and six games ever since it was announced the Spurs would face the Warriors first, but I’ve settled on Warriors in 6. I don’t buy into the thinking that Curry being out instantly gives their first round opponent the edge. I will, however, say this. The Warriors aren’t coming into the series playing the best ball of their season and they’ve lost I believe 10 of their last 17.

Curry is a pace-setting guard for that team and his shoot-from-anywhere range makes them a bit less predictable. They will miss him, and as well as Quinn Cook has done, there’s a large dropoff. But there are those three other All-Stars, and it’s going to take another herculean effort from LaMarcus Aldridge and consistent offense from other players to have any chance at extending this series at all. I think Rudy Gay will be Robin to Aldridge’s Batman, but they will also need more from either Danny Green or Patty Mills regularly.

Benjamin Bornstein
Golden State in 5. Spurs aren’t going to have the firepower necessary to keep up with them and LaMarcus Aldridge getting double teamed isn’t going to help anybody. Just not enough other playmakers.

Collin Reid
Warriors in 5. With the Spurs’ rough road record this season, it’s tough to pick them to win a game in Oracle. Because the Warriors are missing Curry, the Spurs can probably at least take a game or two at the AT&T Center. Even without Curry, though, the Warriors have three All-Stars and too high a level offense and defense when locked-in for the Spurs to match.

Victoria Villarreal
Series Prediction: Spurs in 6. Reason: Without Steph Curry, the Warriors look deflated. They haven’t had the season to adjust to playing without the high-impact guard. On the other hand, the Spurs have shown improvement over the last few weeks. It seems they’re finally getting used to their identity as a unit without their high-impact player, Kawhi Leonard.

John Diaz
San Antonio facing an injury riddled Golden State Warriors squad in the playoffs looked appetizing five weeks ago when the Spurs were still hope trafficking a Kawhi Leonard return. Now the rematch of last season’s Western Conference Finals looks like a ticket to an early vacation for the silver and black. While the injury to Steph Curry presents plenty of challenges in Golden State’s quest to win their third championship in four years, this currently constructed Spurs roster without Kawhi Leonard doesn’t present enough of a challenge on offense or defense. That fact, paired with the Spurs road woes, makes for an unhappily ever after ending to this season. Warriors in five.

Poor Man’s Commish, Let’s Go Warriors
I’m gonna go 4-0 but that’s not intended to be a knock on the Spurs. It’s just that I feel like the Warriors want and have an opportunity to get their swag back, and this is their chance to lock in and show us they were, in fact, not motivated at various stretches of the regular season. However, if I’m taking emotion out of it, then I’ll go 5 games for the same reason in that they’ve shown so many times in the regular season to let up (a lot) on gas pedal.

Jeff Garcia, Spurs Zone Editor/Locked on Spurs
Spurs will put up a valiant effort but in the end, the Warriors will move on to the second-round. The NBA champs (even without Stephen Curry) have a shorter to-do list versus the Spurs than the Spurs have against the Warriors. The Spurs have to play flawless basketball for 48 minutes for four games if they want to dethrone Golden State.

Joe Garcia, 2 Shots Podcast
I can see the Spurs making this a competitive series against the Warriors and could easily see this going 6 or 7 games. The Spurs will need to rely on their defense to help slow down this young and athletic Warriors team. I believe the Spurs can upset the Warriors but this will take a complete team effort and someone else needs to step up on the offensive end besides LaMarcus Aldridge.