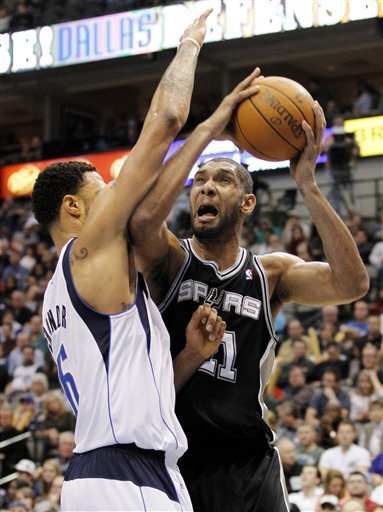 The San Antonio Spurs continue on their perch atop the NBA and Western Conference after a win against the Dirk Nowitzki-less Dallas Mavericks on Thursday night.

As was the case against the Lakers, the Spurs got scoring help from outside the big three, with Gary Neal providing the biggest punch with 21 points off the bench.

Although the Spurs expected a test against another Western Conference contender, they’ll have to wait until January 14 to see the Mavericks again.

With the win, the Spurs are now 28-4 on the season and are three and one-half games above the Mavericks in the West.

Mavs Blogger Rob Mahoney of the Two Man Game spoke to me pre-game during our gameday Q&A. Here was his answer to whether the Mavs would win or lose last night’s game.

“The Spurs’ offense, and the Mavs’ lack of offense. Without Dirk, the Mavs are pretty hopeless offensively. Dallas is structured in a way that maximizes Dirk’s talents but also makes the team incredibly reliant on his scoring, spacing, and offensive presence. Take him out of the mix, and the effectiveness of Jason Kidd, Jason Terry, Caron Butler, et al are all slashed. A fully operational Mavs team would have their work cut out for them with the Spurs, but they don’t have much of a chance without Nowitzki.”

“He’s still a premier player and an All-Star. I can guarantee you that.” – Mavericks coach Rick Carlisle on Duncan’s 17 point, 11 rebound night.

In Black and White

Dirk-less Mavericks give it their best shot, but fall short vs. Spurs (Dallas Morning News).

If you need a bottom of the roster three-point threat, Gary Neal is one to watch. He may have a very, very low ownership rating, but if you’re in a deep league, Neal has been doing what he did tonight throughout the season. When he plays, he scores, and when he scores, he does it efficiently. Neal is currently shooting 42 percent from the field and 38 percent beyond the arch, which should secure him a spot on your watch list.

So proud of my husband! Leading the @spurs w/ 21 pts and 5 reb in a huge game against the Mavericks. STILL the best team in the @NBA ! – @LeahANeal.

Be sure to look for Robby Lim’s “Stats of the Game” here on Project Spurs in a few hours.