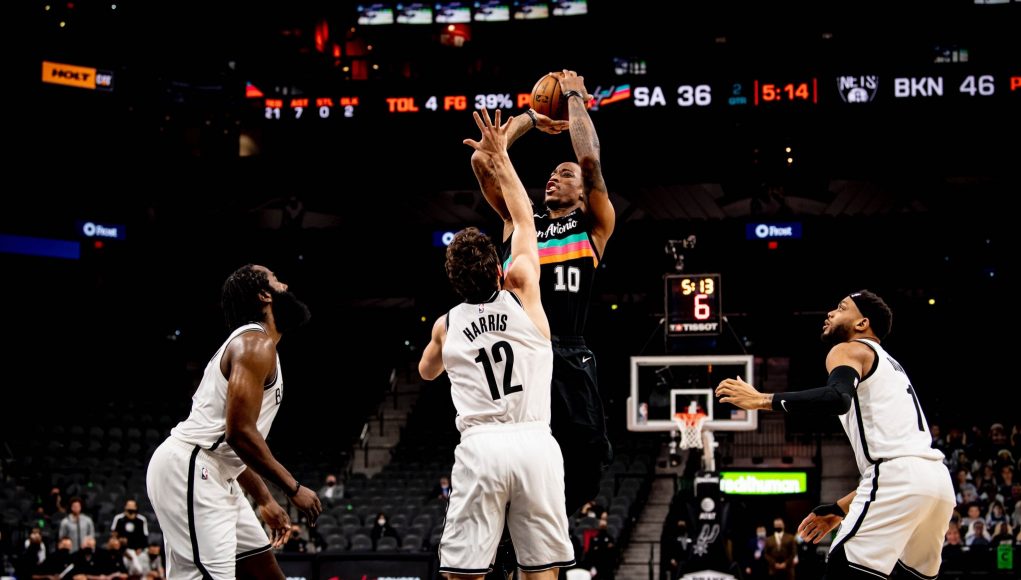 SAN ANTONIO — Despite a furious fourth quarter rally to force overtime, the San Antonio Spurs fell 124-113 to the Brooklyn Nets (23-13) at the AT&T Center on Monday night as they continued their homestand before the NBA All-Star break.

With the loss, the Spurs dropped below .500 at home (8-9) but held firmly in fifth place in a jam packed Western Conference standings. The Spurs played without key players due to health and safety protocols but Spurs Head Coach Gregg Popovich hinted Keldon Johnson could return as soon as Tuesday.

DeMar DeRozan led the Spurs with 22 points and 11 assists while shooting 42 percent from the floor.

“I thought they were great,” Popovich said. “Really worked hard. They have dug down deep all year. They never give in, and tonight was another good example.”

In case you missed it, here’s are the highlights from Monday’s game.

Since LaMarcus Aldridge missed time with his hip soreness, Jakob Poeltl has become a force inside for San Antonio. Monday night was another stellar performance from the big man with 14 points and 12 rebounds.

Defensively, he held things down in the paint and did his best to hold off Nets big man DeAndre Jordan on the glass. The Nets won the rebounding edge 59-56 for the game but Poeltl was a big reason why the edge on the boards was so close.

With the Spurs shorthanded due to players missing the game for health and safety protocol, that meant more minutes for Luka Samanic. In 16 minutes of action, Samanic finished with eight points on 42 percent shooting and went 2-for-5 from deep.

“Anybody who hasn’t played much that gets minutes, it’s good for them,” Popovich said. “He’s done a good job coming in and it will help him moving forward.”

Defensively, he was aggressive and did not let up. He defended Harden well and kept his ground, being disciplined and while it was not always pretty — his confidence grew in this game. Despite the loss, the game was a good experience and important for Samanic’s development.

With the two-headed monster for Brooklyn doing damage, the Spurs could not allow any role players to have good outings. Unfortunately, San Antonio couldn’t contain Bruce Brown or Nic Claxton.

Brown had 23 points and shot 76 percent from the floor. Claxton came off the bench to add 17 points and really hurt the Spurs down low without Poeltl in the game to anchor down the paint.

With several key Spurs out due to health and safety protocol, San Antonio had a balanced attack in Monday’s loss to the Nets. Dejounte Murray and Lonnie Walker IV each chipped in 19 points apiece with Walker connecting on 5-of-10 three-point attempts.

“He is playing pretty confidently,” Popovich said of Walker’s recent play. “He is learning how to play the game. He’s understanding what is going on, score time, good shots, bad shots, being consistent defensively. He’s doing all those things better.”

Patty Mills came off the bench to score 14 points and five assists, shooting 50 percent from the floor for the game.

All this helped DeRozan and took some of the scoring load off him despite the fact he led the Spurs in scoring. Once the team is fully healthy, this scoring attack should stay balanced and it would make the Spurs much more dangerous for other teams after the All-Star break.