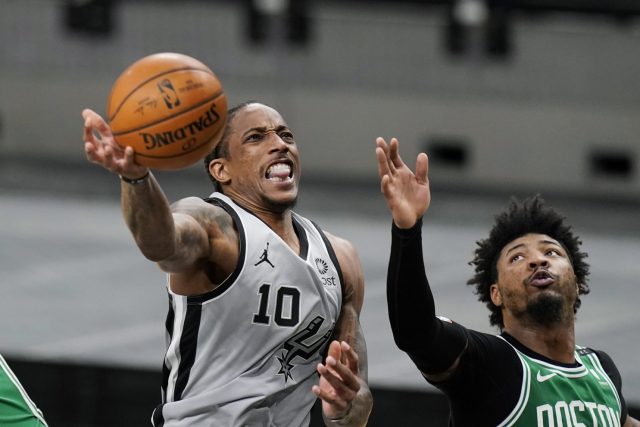 SAN ANTONIO — Following their game against the New Orleans Pelicans being postponed on Monday due to health and safety protocols, the San Antonio Spurs returned to the court on Wednesday and earned a 110-106 win over the Boston Celtics at home.

The win is the second straight for San Antonio, who improved by going two games above .500 on the season and earning win number 10. The Spurs played without Derrick White but is looking closer to returning – possibly this weekend says coach Gregg Popovich.

Boston was led by Jason Tatum’s 25 points, including five straight to tie the game late in the fourth quarter to go along with seven rebounds and four steals. Jaylen Brown added 24 points, four rebounds, and five assists. Together, Tatum and Brown combined for 49 of the Celtics’ 106 points.

San Antonio had a season-high 20 turnovers in the game, including five in the third when Boston went on a 18-3 run to knot the game at 83 apiece. The high amount of turnovers is uncharacteristic for the Spurs, who came into the game as the team with the fewest turnovers.

“It hasn’t been our problem this year, but tonight it was,” Popovich said of San Antonio’s turnover woes.

The Spurs veterans continued to lead by example on Wednesday, helping San Antonio buckle down and grab the home win over a solid Eastern conference team.

DeMar DeRozan led the Spurs with 21 points, seven assists, and five rebounds. DeRozan shot 87 percent from the floor and connected on both of his three-point attempts. LaMarcus Aldridge added 20 points, shooting 8-for-14 from the field.

We were just aggressive, hitting the glass, and picking up the tempo,” Spurs forward Keldon Johnson said.

The play of the vets helped players like Johnson, who remained aggressive while Boston made their third quarter run. Keldon finished with 18 points and 10 rebounds on the night, while Lonnie Walker IV added 14.

The biggest take away from Wednesday’s game has to be the Spurs’ interior defense. Jakob Poeltl and Aldridge caused problems for Boston’s wing players and did not allow them to get to the basket with ease.

The turnovers from Boston turned into 22 points for the Spurs, a new season-high.

The Spurs are now 10-8 on the season and will return to action on Friday against the Denver Nuggets at 7:30 p.m. from the AT&T Center.