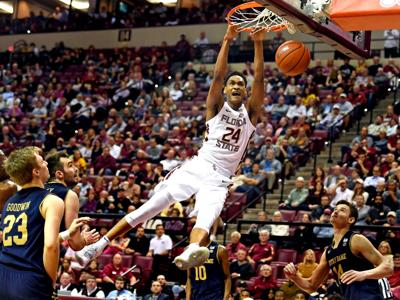 The All-Star Break is upon us and giving the San Antonio Spurs a much needed rest during their Rodeo Road Trip. They have two more games on the trip until they meet the Mavericks at home on February 26th.

Currently, they sit in 10th place in the standings and will likely finish there, barring a major collapse from another team or an unlikely run from the Spurs to end the season.

With them likely taking anywhere from the 11th to 14th pick, one prospect that has been jumping up mock draft boards is Florida State wingman Devin Vassell. The 6-foot-7, 195-pound sophomore has been the Seminoles’ best player this season while leading them in points and rebounds.

Here are some of his stats so far this season:

Vassell is an athlete with a good motor and can guard multiple positions to boot. He will have to put on the weight to do the same thing at the NBA level, but he’s done it very well at the collegiate level.

Playing for Leonard Hamilton has given him the necessary experience for switching onto smaller and bigger defenders to know what to do once his body eventually catches up to where it needs to be.

The young wing has really only shaped into form this past season and that’s because of how the Seminoles tend to play and go 10 or 11 deep on their bench.

He is now the go-to guy on this team despite playing only about 29 minutes a game. He can shoot it from deep and he has been improving his off-the-dribble pull-up jumper as well. For those having Danny Green flashbacks, Vassell could be a similar player, but even more versatile on defense with some extra work needed on his jumper.

He is good in catch-and-shoot situations, but has been called upon to do more than that this season for the ‘Noles.

The biggest deficiency in Vassell’s game right now is his ability to go out and create a shot for himself. He has to tighten his handles a bit and finish a little better around the rim, but he is well on his way to becoming a legitimate 3-and-D prospect. He already goes up and over defenders easily on jump shots, now it’s just a matter of translating that to shots at the rim.