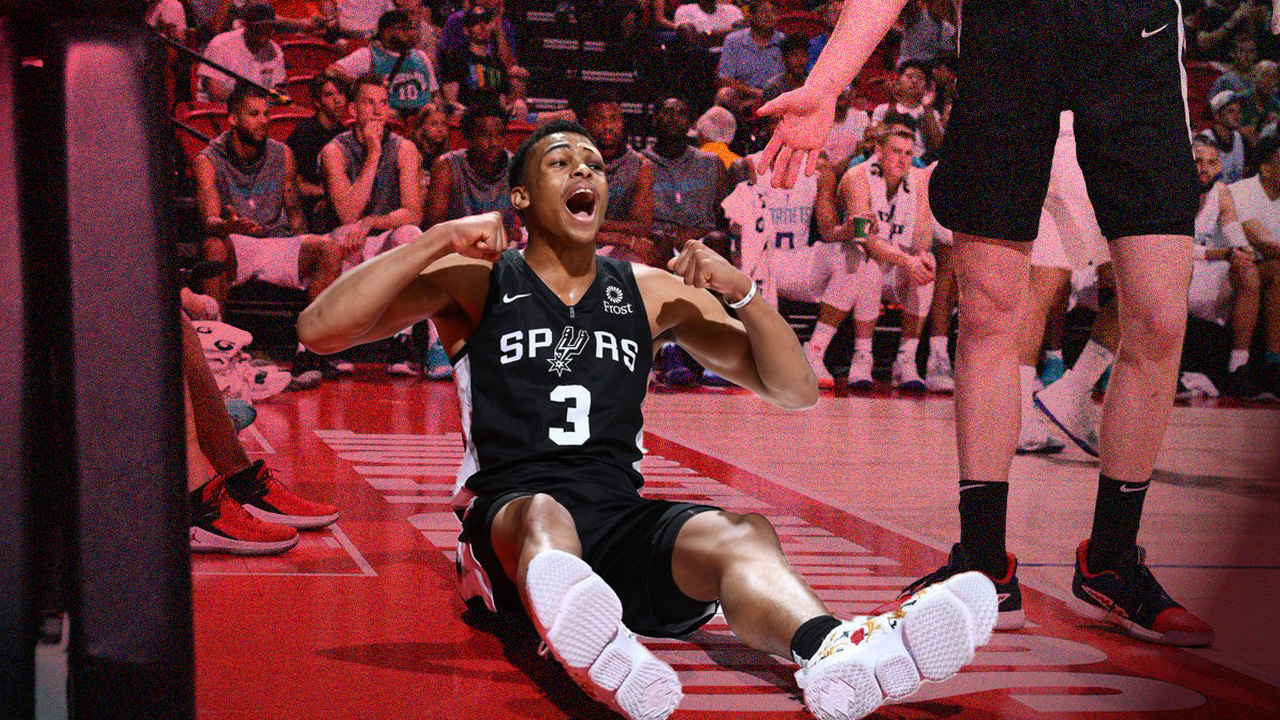 With Lonnie Walker and Drew Eubanks in street clothes (both officially DND – Rest), the Summer Spurs rookies took full advantage of the extra playing time and delivered a 106-96 win over the Charlotte Hornets. Keldon Johnson is your star of the game with 19 points. Quinndary Weatherspoon also had 19 points and Luka Samanic had 16.

Outside. Inside. Dropping dimes. Samanic (almost) did it all at Summer League on Sunday. Samanic started at the five and while he still has to put on weight (he was bullied at times in the post by Hornets center Kennedy Meeks during the second quarter), the thought of Luka playing the five in small ball lineups is very intriguing.

Coach Hammon alluded to this after the game. “It’s something he is going to have to learn as he goes just because the trend of the league of small ball – you get a guy that size who kind of understands what is going on the parameter and he can play 5 or 4 or whatever and be efficient.”

While Samanic is unlikely to make an immediate impact this fall, he is in good hands with the Spurs player development system.

“He is learning on the fly, we are going to stay on him,” said Hammon. “There’s times when he has these oh-ah moments and then there’s other times where you have to remember he is 19. He’s learning as we go and we are going to stay on him and keep telling him the truth. He’s a really good kid and obviously uber talented so we are excited about him.”

One of the interesting things I noticed today was the Spurs deliberately calling out a play, more than once, to iso Samanic on the left wing around the three-point line. On a side note, Josh Magette was a great floor general today. While the first attempt resulted in travel, Luka was able to get into the lane on future attempts with positive results. This play call is something for Spurs fans to keep an eye on going forward.

Coach Hammon and the Spurs are also keeping their eye on this. “We knew he was a versatile big and he is a guy who is used to having the ball so we are just trying to figure out putting him spots in the system where we can get the most out of him and still get the most out of our guys around him.”

While Samanic needs to improve his strength when rebounding the ball, the benefits of his ability to bring the ball up the court was on display at the end of the first half. After grabbing the ball with little time left on the clock, Luka pushed the ball up the floor and (finally) found Jeff Ledbetter for a three.

“When he really helps us is on the defensive end and he can bring it and now you have a lot of options coming down the floor at a pretty good pace. Fives are not used to guarding guys bringing the ball up the court. When he gets on the glass he can help us out right away.”

The steal of the draft

With 10 points in the fourth quarter, Johnson was a force to be reckoned with. Spurs fans are going to love this guy – it looks like he may have a little bit of Manu in him as his competitive spirit is readily evident.

“We knew he was a nice player, but his competitiveness and his nature, kind of seeing that up close, you can watch some film and do some stuff but for us who do not necessarily watch these guys for 12 or 15 games throughout the year, it has been nice to see his competitiveness,” Hammon said. “He is a guy who could be the steal of the draft. He’s a guy who we like, he has a lot of potential, he does a lot of different things – defensively I think has a lot of upside.“

Speaking of defense, Johnson looks locked in on that end of the floor, which impressed Hammon.

Johnson also does not back down from a challenge.

“It got a little chippy out there at times, but I like that stuff,” remarked coach Hammon. “Play on and let your playing do the talking. He gets up into people, he’s not scared. We gave him an adjustment at halftime and he went out and executed it on the defensive end. It’s always nice to make those tweaks defensively.”

While the rookies were the stars of the show, in true Spurs fashion, it was an entire team effort that delivered the win.

“Glue guys are always nice. Doesn’t matter if you have a full roster or not, glue guys always help you win games.” Coach Hammon said after the game. “I thought we had nice contributions, especially from our bench.”

Indeed. Ben Moore also had an impressive game with 17 points (including 9-10 from the line) and eight rebounds, while Jordan Barnett chipped in with 12 points off the bench.

“Galen hadn’t played a lot and I thought he gave us solid minutes. Jeff brings the defense and the energy and just overall smart play. So I thought we had multiple guys step up and have nice contributions.”

Ledbetter, a fan favorite, and the “Mayor of Cedar Park,” may be the ultimate glue guy for the Summer Spurs. “He’s a glue guy. He keeps everybody on the same page,” Hammon said. “He has been around the system so he kind of knows what the deal is, what is expected of him and the team. He can kind of be a player-coach for you out there instructing guys, getting guys in the right spot, communicating certain terminology that maybe certain guys are not familiar with and you do not have time to go over every little thing.”

The Summer Spurs are fun

One thing that struck me throughout the game was how much the bench was into the game from beginning to end. There was constant chatter and the players were constantly out of their seats to support one another, Walker in particular.

“I don’t know if I have seen a summer league as tight as these guys are” Hammon said. “They truly have enjoyed being together, getting to know each other. Practices have been a lot of fun, really competitive. I think everyone wants to get better in there… we have a lot of unselfish guys in there and they are a lot of fun to be around.”

Spurs fans, both in San Antonio and Austin, are really going to enjoy this group!

The Summer Spurs are back at it tomorrow, taking to the court against the Toronto Raptors – a Spurs in the 6 special. Tip-off is 4pm PST (2PM CST, 1PM EST).