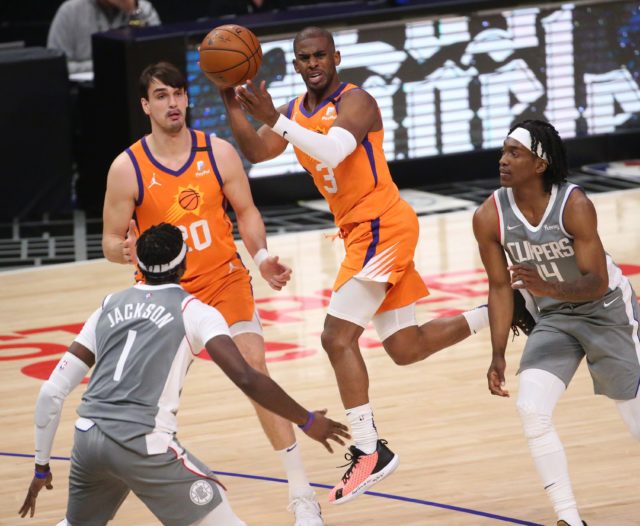 The Phoenix Suns are on the doorstep of the NBA Finals after they held on for an 84-80 victory over the Los Angeles Clippers in Game 4 of the Western Conference Finals at the Staples Center on Saturday night.

In a very rare defensive matchup in today’s NBA, both teams could not get the ball to go in the rim. In the end, free throws sealed the deal as Chris Paul made his but Paul George missed critical foul shots for the second consecutive game.

Devin Booker scored 25 points to lead Phoenix and DeAndre Ayton pulled down 22 rebounds to go along with 19 points.

Paul added 18 points in the win.

”That was a slugfest,” Suns head coach Monty Williams said. ”It wasn’t Offense 101, for sure.”

The Suns led by as many as 15 points but the Clippers rallied with a 30-19 third quarter to get right back into the game. George led Los Angeles with 23 points but did so on just 5-for-23 shooting.

Ivica Zubac had 13 points and 14 rebounds and Reggie Jackson added 20 points for the Clippers, who are now in a 3-1 hole going into Monday’s Game 5.

Both teams shot in the 30s. Los Angeles shot 32 percent for the game and Phoenix was at 36 percent.

‘We had a chance to take the lead on 12 possessions and couldn’t do it. It just wouldn’t fall for us,” Clippers coach Tyronne Lue said.

Los Angeles played without Kawhi Leonard, who watched the game in a suite with his family. Leonard has not played since Game 5 of the Conference Semifinals against Utah and there are reports of him being “unhappy” with the Clippers medical team.