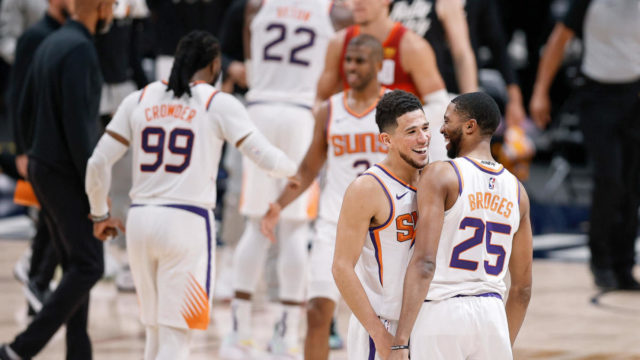 The NBA Playoffs rolled on Sunday night with a pair of Game 4’s. The Milwaukee Bucks looked to even their series with Brooklyn, while the Suns looked to close out Denver and reach the conference finals.

In case you missed it, here’s a recap of both Sunday games:

The first game of the day saw the Milwaukee Bucks even their best of seven series with the Brooklyn Nets with a 106-97 win on Sunday afternoon. The series now heads back to New York even at two games apiece.

Giannis Antetokounmpo and Khris Middleton finally got the help they desperately needed as the Nets lost Kyrie Irving to injury and the indication is he could be out a little longer than that.

Antetokounmpo had 34 points and 12 rebounds to lead Milwaukee and Middleton added 19 points, and Jrue Holiday chipped in 14.

”At this stage, it’s whatever it takes to win the game,” Bucks head coach Mike Budenholzer said. ”It certainly helps to get more guys contributing, making shots. P.J. Tucker was phenomenal on both ends of the court.”

Kevin Durant did his best to keep the Bucks afloat despite missing two of their key stars. He scored 28 points but shot 36 percent and Irving was the only other player in double figures with 11 points.

”We’ll have to see how it goes,” Nets coach Steve Nash said. ”We’ll cross our fingers.”

The nightcap saw the Suns complete their sweep of the Nuggets with a 125-118 win at Ball Arena. Phoenix will now play the winner of the LA Clippers-Utah Jazz series in the Western Conference finals.

Not even a lineup change could help the Nuggets, who have been depleted with injuries before the playoffs began. Jamal Murray tore his ACL in the jam-packed regular season, which saw Austin Rivers try to fill that role.

Will Barton led the Nuggets with 25 points and Nikola Jokic added 22 before his third quarter ejection for a hard foul on Cameron Payne.

”I didn’t feel like it warranted a Flagrant 2 ejection because he’s making a play on the ball,” Denver coach Michael Malone said. ”There’s marginal contact to Cameron Payne’s nose, I believe. So, I was shocked. I’m still a little bit shocked that they called a Flagrant 2 and ejected the MVP on such a play.”

”You can ask anybody on this team how has Chris developed your game and everybody’s going to have a lengthy answer because he cares,” Booker said.