Facebook
Twitter
Email
Print
Last season with the Chicago Bulls, Marco Belinelli was called upon to play increased minutes thanks to several injuries, most notably a previous MVP, guard Derrick Rose. Marco stepped in and performed admirably all the way into the playoffs.
It seems that it didn't go unnoticed by the San Antonio Spurs front office.
The Spurs wasted no time when free agency began and quickly reached out to Marco, hoping to land the FA who as it turned out, was getting attention from several NBA clubs at the time.
Apparently the Spurs offer was something that the journeyman SG couldn't pass up.
From Hoops Hype: 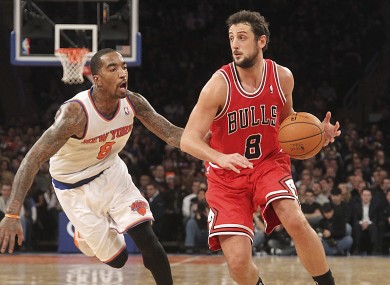 "Why the Spurs?
MB: Because I think it’s one of the best teams or maybe the best team in the NBA, they have a great organization, a great coach. I will improve my game and try to help the team to win the championship.
How was their pitch?
MB: This summer a lot of teams called me to sign a contract with them. But at the same time when a team like San Antonio and a coach like Gregg Popovich call you, and they want you so bad on their team, then you want to win the championship with them. The money was good, it’s a two-year deal, but at the same time it was the best team to improve my game and try to win the title."
Considering the Spurs large international contingent on the roster, perhaps that was another reason why the Spurs were so attractive to the Italian shooting guard.
With Marco now facing his last game with his Italian national team at EuroBasket, we should soon see him roll into the Alamo City, ready for his first Spurs training camp.
Here's hoping that Marco will smoothly transition into the Spurs way of doing things, and quickly gel with his new teammates.
So Spurs fans, weigh in with your opinions on the Marco signing. Yay or Nay?