You can read Stephen Anderson’s full recap of last night’s San Antonio Spurs loss to the Utah Jazz here on Project Spurs, but here are a few other notes and quotes that stood out from the game.

In a recent Spurscast episode, Paul Garcia and Victoria Villarreal talked about how the Spurs had improved shooting and defending from beyond the arch. Obviously, there was going to be some slippage in that area with Derrick White being sidelined for the remainder of the season.

Bogdan Bogdanovic and Joe Ingles shot a combined 4-of-14 from behind the arch, and the known Spurs-killer in SA native Jordan Clarkson came off the bench for 16 points but was just 2-of-10 on his three-point attempts and 7-of-20 overall.

As a team, the Jazz were limited to 30.6 percent on threes, whereas they are regularly around the 40 percent mark. 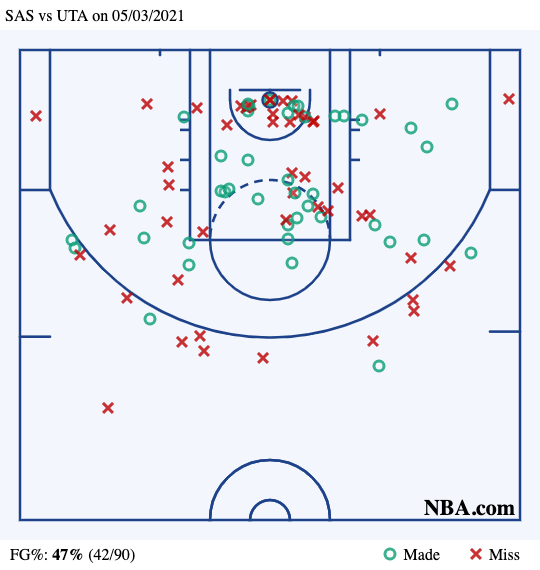 On the other end of the floor though, the Spurs struggled to capitalize and make their own threes, only knocking down 28 percent of their threes. There were more zeroes in the attempts column than anything else, and only Rudy Gay

“(The Jazz) do that. They limit everybody to threes. They stay pretty locked up, so you’ve gotta do some different things which we did in the second half,” Spurs coach Gregg Popovich said.

San Antonio usually relies on Patty Mills and Lonnie Walker IV to knock down long-range shots, but both players struggled on offense, as did several others, which does not make it easier when facing one of the NBA’s top teams.

“I’m at a point mentally where I just have to be aggressive and help this team the way I know how to,” Spurs forward Rudy Gay said after last night’s game.

While jumping on Twitter during a Spurs game may tell a different story, Gay has played well, especially lately. Looking at his season averages of 11.5 points and 4.9 rebounds per game in just over 21 minutes per game seems like a fairly solid return.

While some question his shot choice, and he has been known on some occasions to fire up some questionable or forced shots, he’s shooting 42 percent from the field and 39 percent on threes.

He had 17 points, seven rebounds, two steals, and two blocks last night in just 22 minutes, and he shot a high percentage all over the floor. In his last five games, he has averaged over 16 points per game.

I’m all for giving younger players minutes, but when you get a performance like that, especially when so many other players struggled, it may be time to reconsider some of the narratives on Gay.

21 minutes is already considerably low, and I’m not sure how much more some want those minutes to be cut. The question also becomes about replacing the production he provides. The Spurs have some talented young players, but cutting a player who has gotten it right more often than he’s gotten it wrong for an unknown quantity on a nightly basis can be a big ask. You can deal with a bad shot attempt or a defensive mishap every so often for what you’re getting in return.

Focusing on the battle of the boards for Wednesday matchup

While three-point shooting and a slow start in the first half were problematic for the Spurs last night, one big, glaring issue and differentiator in the game was the battle of the boards.

Rudy Gobert is no doubt one of the better centers in the league, and aside from him getting just about everything he wanted inside on his way to 24 points, he also had 15 rebounds. Derrick Favors came off the bench and in just under 19 minutes, he had more rebounds than any single Spurs player with nine, and a guard, Royce O’Neal, had seven rebounds, matching Rudy Gay.

The Spurs will need to be much more active on the boards tomorrow night in order to have a chance to pull off a win. Jakob Poeltl and Drew Eubanks had fewer rebounds than both Dejounte Murray and Devin Vassell.

In the end, the rebounds differential was 50-37, giving the Jazz much more opportunities, which they fully took advantage of.

The Spurs will especially need Poeltl to play a more physical game. Often times he’s left on an island when a Spurs wing gets blown by or is screened and he has to choose between defending the driver or staying home on a post player that could receive an open pass at the rim. However, they’ll need much more than six points and four rebounds. Gorgui Dieng also seems like the better fit defensively against the Jazz bigs as the first center off the bench.

We’ll see what adjustments are made tomorrow night.