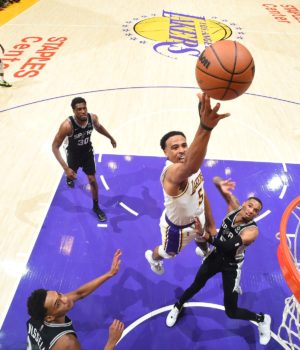 The San Antonio Spurs opened up a three-game road trip on Sunday in Los Angeles but could not complete a late rally, falling 114-106 to the Lakers at the Staples Center.

The loss is the second straight for San Antonio, who fell to the Dallas Mavericks on Friday night. The Spurs played without Jakob Poeltl, who is expected to return for their next game. Also out was rookie big man Jock Landale, who is in health and safety protocol.

“I was really happy with their effort,” Spurs Head Coach Gregg Popovich said of his team’s effort. “Too many turnovers tonight against those guys, but we never gave in. They kept playing, they’re getting better. They’ve got to keep their energy up.”

Here are three big moments from the Spurs’ loss to the Lakers on Sunday:

The Spurs fell behind by 14 points but would rally to keep the game close in the second half. Led by Devin Vassell’s play off the bench, the Spurs worked as a unit to cut the deficit down to just two points late in the fourth quarter.

Vassell finished with 19 points, including going 4-of-7 from three-point range. Doug McDermott had a triple to cut San Antonio’s deficit to two points after a Laker’s bucket. Mistakes on both ends of the floor would the undoing for the San Antonio Spurs on Sunday.

“I think he’s growing by leaps and bounds,” Popovich said of Vassell. “He is showing a lot of confidence offensively. Defensively, he is taking pride in it. I think he’s doing a really fine job.”

As mentioned above, the little mistakes for the San Antonio Spurs would hinder them on Sunday. Poor shot selection, defensive mistakes, and turnovers saw the Lakers go on a 7-0 run after San Antonio cut the deficit to 105-103. The Lakers took a nine-point lead and would outscore the Spurs 9-3 in the final minutes of the game.

“Too many turnovers against those guys, but we never gave in,” Popovich said.

With Poeltl out of the lineup, teams have been able to have their way in the paint against the San Antonio Spurs. Now, it appears the Spurs’ big man is on the mend and could be returning as soon as Tuesday night against the Clippers.

The San Antonio Spurs are now 4-9 on the season and will return to the court on Tuesday when they face Paul George and the LA Clippers (8-4) at 9 PM from the Staples Center.