With tonight’s fourth and final game of the regular season between the San Antonio Spurs and Los Angeles Lakers. I asked our own Jeff Garcia and Rey Moralde of The No Look Pass five questions about tonight’s game. 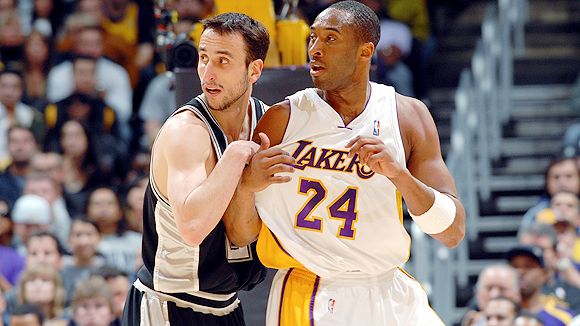 Jeff: The Spurs. With San Antonio facing the defending NBA champs in LA, what better way to send a message to the Lakers than to get the win and leave the Lakers thinking San Antonio will be a handful. Plus, the last time the Spurs and Lakers met, Los Angeles obliterated San Antonio. Do not want to give LA any mental edge.

Rey: I’ll say the Lakers, purely on momentum. They’ve lost four in a row after that Portland game and if they lose to OKC, that would be five. I just want to see a glimpse of a playoff-ready Laker team instead of a team that doesn’t care.

2. The Lakers have the size, while the Spurs have the better bench. Which is more important and why?

Jeff: Size. With size, a team can wear-out an opposing team and since the playoffs means a slower, more methodical game, size is crucial.

Rey: As you get into the playoffs, depth doesn’t matter as much as most teams tend to go on a seven or eight-man rotation. Basketball is a tall man’s game and if you can’t get the rebound (the ball), how are you going to create those offensive opportunities. Besides, the Spurs have the Lakers want and that’s size. And size has carried the Lakers through these titles.

3. The Spurs had been pretty consistent all year until the six-game losing streak. The Lakers were a mess before All-Star weekend and then went on an impressive run after. The Spurs have won their last four while the Lakers have lost their last five. Is that telling regarding the momentum both teams will be entering the playoffs with?

J: Indeed. Every team wants to head into the playoffs on the right foot. While San Antonio is currently getting wins — albeit against sub-par clubs — the Lakers are losing on their court, lost to playoff-bound Denver Nuggets and Portland Trail Blazers and dropped games versus sub-par teams like the Golden State Warriors.

J: Is this a joke question? Team. Period. The Spurs are the definition of the word “team.” It’s the team effort that is going to allow a squad get to the Finals. No one player can do that. Michael Jordan even he needed a team of role players like Dennis Rodman, Steve Kerr and Scottie Pippen.

R: I can debate back that the Lakers have a more talented all-around team but let’s hold that off for another story. With that said, I’ll take team. Michael Jordan didn’t win titles until he got a great team. LeBron James STILL hasn’t won a title. And we saw a Detroit Piston team upset the superstar-laden Lakers in 2004. It’s great to have that superstar but you still gotta surround him with a team. So in essence, team over player.

5. What team will win and what is your prediction for the game?

J: Toss up but I will go with LA. Though I said the Spurs will look to send LA a message, with the Spurs locking up home-court advantage in the West and the playoffs, there isn’t anything to play for. With that being said, Popovich will likely rest players, get role-players out there to get some time on the court.

R: The Lakers will win and here’s why: Coach Pop is likely going to sit his guys. Yes, the Lakers may not care, either, but they’ll care more than Pop does at this juncture. San Antonio’s got it all locked up. The Lakers don’t. So the Lakers have something to play for while the Spurs can happily rest their guys for the playoffs this coming weekend.

Thanks to Jeff and Rey for participating and be sure to come back to Project Spurs throughout the day for more game coverage.