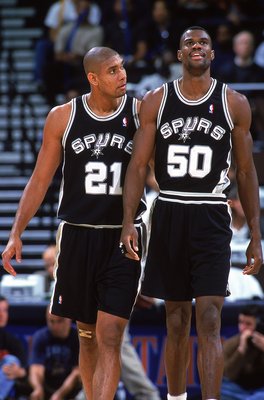 defenders. Case in point, in 1999 when he had David Robinson and a young Tim Duncan to watch his back when an opposing player got past him.

So it came at no surprise that Johnson felt the best move the Dallas Mavericks made was acquiring Tyson Chandler to help out Jason Kidd:

Johnson, an old point guard, said the best thing Dallas did for Kidd was acquiring Tyson Chandler this season to protect the rim and cover for him. “When I was in San Antonio, I needed that help guarding quick guards, too, and I was lucky to have David Robinson and Tim Duncan,” he said.

Indeed, Chandler is a quality defender for Dallas not just for Kidd but for the overall success of the Mavericks. He may not put up huge points, but he defends, intimidates, rebounds (8.9 in the playoffs), and is athletic for a big man.

Something the Spurs desperately need heading into next season.