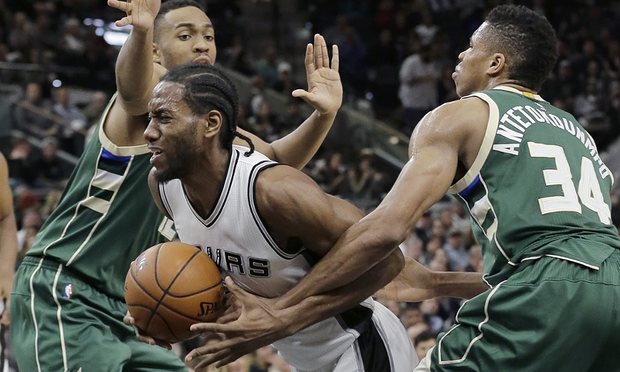 The San Antonio Spurs are just 5-4 in the friendly confines of the AT&T Center, but their 12-0 start on the road is good for second best in league history. The Spurs haven’t been completely dominant, in fact they looked sloppy in several contests but pulled out wins anyway. Monday night was one of those games, as San Antonio came back to win 97-96 in Milwaukee.

The Bucks are now 10-9, but they routinely compete with good teams because of their length and athleticism. Giannis Antetokounmpo and Jabari Parker each put up over 20 points and went a combined 19/20 from the free throw line while the Spurs were 9/14 as a team.

The main issue for San Antonio in their losses has been lackluster three-point shooting, and on this night their 28% clip from downtown almost cost them the game. They were held to just nine points total during the second quarter, and their superstar scorer Kawhi Leonard was limited to five points until the fourth.

Gregg Popovich’s squad scored just 35 in the first half, but after a 36-25 3rd quarter they entered the final period down by just two. Kawhi Leonard has a habit of taking control of close games down the stretch, even if he struggled early on. That trend continued as he exploded for 16 in the fourth quarter, leading the Spurs’ comeback victory.

Leonard shot 2-9 in the first three quarters, but he rebooted and started the fourth 6-of-8. Leonard couldn’t find his three point stroke (1-5), and he uncharacteristically got to the free throw line just once in the game, but shooting from mid-range and attacking the basket was enough last night against the Bucks.

The Spurs played with a ton of energy in the second half, sparked by an unusually high number of high flying dunks. Twice Dewayne Dedmon dove hard to the basket out of a pick and roll for a thunderous alley oop. Twice Leonard blew by his man and threw down over a reluctant help defender. Late in the game he put his team up with a putback dunk.

Couldn't keep up with all these slams in game… so enjoy 'em all at once now. pic.twitter.com/QqFFDgfgri

In the third quarter Jonathon Simmons went to the lane but finished with a high floater, and it was kind of like that scene in an action movie where the bad guy (the rim in this case) gets away and the hero promises to kill him the next time he gets a chance. Just over a minute later, Juice did that thing where he jumps off of a trampoline before attempting to rip the rim from its moorings.

Tony Parker left the game after banging knees with Matt Dellavedova, and Patty Mills couldn’t buy a bucket. With Dejounte Murray tearing it up in Austin, Nico Laprovittola stepped up big time, as the Spurs were +9 in his nine minutes on the floor thanks in part to his five assists.

Pau Gasol had 15 points and nine rebounds, but the Spurs were -9 with him on the floor. Conversely, Dewayne Dedmon put up 10 points and six rebounds while posting a +6 mark. Dedmon was 5/5 from the floor, finishing alley oop dunks on consecutive possessions. He was also effective on defense, which can’t exactly be said for Gasol. It may just be that Dedmon matched the length and athleticism of Milwaukee better, but his superior rim protection has been noteworthy all season.

LaMarcus Aldridge had 18 points, nine rebounds and five assists, and his tenacious play on both ends helped seal the win in the final moments. He blocked Jabari Parker’s layup to keep the deficit at one, got an offensive rebound and forced a goaltend to take a one point lead, and finally secured the last rebound when it looked like Parker was in position to get a potentially game-winning putback. His individual effort shines in all of these plays.

There are some areas where the Spurs can definitely improve. Consistent three-point shooting, better defense from the starting five, and crisper play at home would help San Antonio dominate these games in which they’re just scraping by against weaker opposition.

In a way it’s good for the Spurs that their 17-4 start has been hard-earned. The team has found a way to scrap and win close games, and the recipe calls for Leonard and Simmons from the bench. They’ll use that formula to win, and they’ll use the next 61 games to try to figure out how to dominate.