You know it’s gotta be the offseason and during a lockout when an article about All-Star likeability comes out. 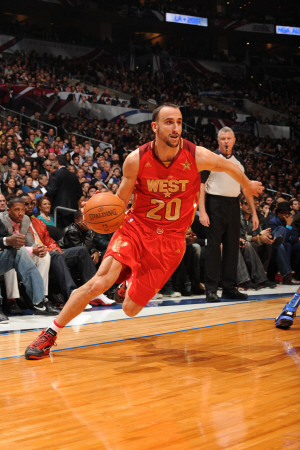 The guys at the Eye on Basketball blog rated NBA all-stars on five characteristics that combine to calculate a player’s likability.

It’s an impossible task, but that didn’t stop the Eye On Basketball staff from trying. Over the last week, we pinpointed five characteristics that combine to make NBA players likeable: “Ballin’ Ability” (how good a guy is as a player), “Winning Attitude” (how dedicated he is to the game), “Talking Softly” (how he comes across in public comments), “Commerical Appeal” (how visible he is in advertisements) and “Public Works” (charitable contributions and other character-defining achievements).

Our panel of four experts ranked every member of the 2011 All-Star teams on a 1-5 scale in each of these five categories. We then added up all the scores to get a ranking on a 1 to 100 scale. The higher the number, the more likeable the player. Pretty simple stuff.

Of the 24 players listed, one player that many Spurs fans would consider the most likeable in San Antonio, Manu Ginobili, is buried at number 18 due to his selfless personality and playing for a small market team.

18. Manu Ginobili, San Antonio Spurs: An egoless star on an egoless team in an egoless organization in a relatively small market, Ginobili has never sought the bright lights. Even after all these years, the average fan doesn’t have much of a connection with him. There’s nothing not to like, but nothing that reaches out and grabs you either.Score: 59

Tim Duncan finished ahead of Ginobili at number nine, just after LeBron James.

Yes, that LeBron James. Duncan earned the unfortunate spot of trailing James on the list thanks to his “bland personality.” They did have some good to say about Duncan though.

9. Tim Duncan, San Antonio Spurs: Duncan has been so good for so long — and won so much — that the respect factor afforded him is significant enough to make up for a bland, sometimes robotic, personality. Duncan can be subtly hilarious and occasionally sharp-tongued with the media. He is also unfailingly classy. Score: 72.

The Onion might have something to say about Duncan’s likeability. but hears to hoping DeJaun Blair and Gary Neal claim top spots if the series is continued with NBA Rookie Challenge likeability rankings.