Once former San Antonio Spurs forward DeJuan Blair signed with the Dallas Mavericks he simply unleashed about his former team. 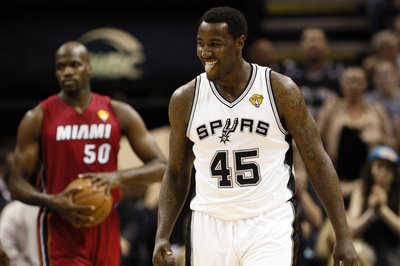 He's on record saying the Spurs didn't believe in him, said the Spurs might have won their fifth NBA title if coach Popovich played him more, has made it known he has the first Mavs-Spurs game circled in his calendar and even Mavs owner Mark Cuban has said Blair will punish San Antonio this coming season.

Well the verbal jabs keep coming from DeJuan as he shows there's no love lost.

Via Sports Day DFW:
“Like everybody else who doesn’t play, it’s very disappointing,” he said. “But I knew I was going to a new team and somebody else was going to take advantage of the potential I had. So to me it’s not a big deal.
“It’s going to be fun being on the opposite team and playing with the Mavs (in the rivalry with San Antonio).  They didn’t give me anything when I was there. I mean, the fans gave me everything. But everything else, it is what it is. I just look for us to get a win (when the Mavs play the Spurs).”
I disagree with Blair here. San Antonio did give him opportunities to shine.
He battled weight issues early in his career, complained publicly about the lack of playing time and when he did get on the floor, he just didn't produce like he did early in his pro-career with the Spurs.
Sure, the reduction of minutes would lend to a drop off in Blair's numbers but there was a reason for this. Aside from Tiago Splitter emerging as a viable option in the paint, the bad attitude probably didn't help his cause.
There are many reasons one can point to and speculate as to why Blair fell out of the rotation (and favor) with the San Antonio coaching staff but in the end, it just wasn't working out and Blair had to go.
The first time the Mavericks and Blair will visit the AT&T Center will be January 8. I am sure Spurs fans will be there to give DeJuan a "warm welcome" back.