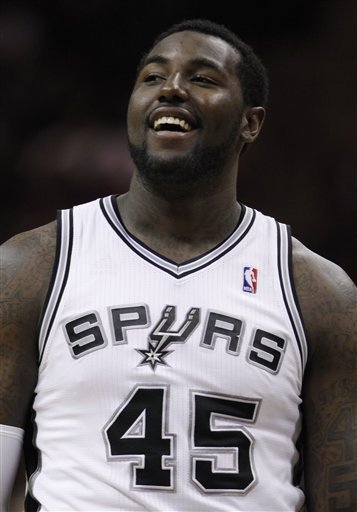 Listed generously at 6’7” and weighing 270 pounds, San Antonio Spurs’ DeJuan Blair is considered small by NBA center standards. However, what he may lack in height, he makes up for in strength. As he carries the hope of his neighborhood on his shoulders.

This Pittsburgh native is from an area in Pittsburgh known as the Hill District, and he is an inspiration to everyone in it. He can’t go any where in it without being recognized.  His Uncle Michael Smith says, ””You ride through here with him, you get tired of beeping the horn.”

DeJuan’s story goes like something out of a story book. He comes from a neighborhood with a poverty rate at 40% and is known as Pittsburgh’s most dangerous. ”The Hill,” as it’s called by residents, has been so neglected from commercial development, there hasn’t been a grocery store there in 30 years. He rose up out of this to become a high school basketball star. Being recruited by what he said was 18 schools at one point. But the native son chose to stay home in Pittsburgh, within walking distance of ”The Hill.” In an area of such strife, a local hero can reach mythical proportions, and he has.

“Everybody likes him. I can’t explain how much he means to people around here. I liked the other schools and coaches he was looking at, but what did they have that he couldn’t get in his own backyard? I told him he had the chance to change the face of an entire city. I truly believe that he can and he will,” said his uncle Michael Smith.

The word hero is used a bit too liberally these days. But DeJuan Blair is the embodiment of the idea of what a hero should be. So many Hill District residents can identify with him. He grew up poor and because of his spirit and determination he was able to have a great deal of success. They see DeJuan as a symbol of hope. They see him doing it and think I could do it too.

By any measure, DeJuan has achieved the American dream. He’s a successful professional basketball player and very active off the court in his community doing charity work. He’s never forgotten where he came from.  He started a charity basketball event with Pittsburgh Steelers linebacker Lamar Woodley last year raising money for various Pittsburgh area charities. This is on top of his many Hill District community center activities he does for kids.

It’s nice to see an athlete strive to be a champion of public service as well as a champion on the court. And he’s providing people with what only someone from their neighborhood can. Hope.