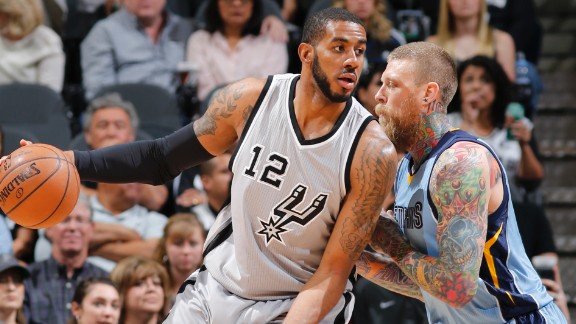 LaMarcus Aldridge joined the Spurs as a free agent two summers ago, and his first season with the club was successful by most accounts. He averaged 18 points and nearly nine rebounds per game, pairing with Kawhi Leonard to lead San Antonio to a franchise-best 67 wins.

So why are rumors circulating that the star power forward will be traded before the end of the year?

First, Zach Lowe of ESPN mentioned that Aldridge’s name may surface in trade talks in a piece entitled 30 Crazy Predictions for the 2016-17 NBA Season. Lowe doesn’t mention any friction between Aldridge and the team. Instead, he makes the case that if the Spurs aren’t in championship contention this year, it would make sense for them to move an aging star in exchange for younger assets, especially because Golden State will be title favorites for the next few years.

“The Spurs are self-aware. I have a hunch they know this is something of a placeholder season, and that without some injury luck swinging their way at the right time, they are a tier below Golden State. Aldridge is 31, six years older than Kawhi Leonard, and his trade value will never be higher; he can opt out of his contract after the 2017-18 season.

The Spurs will see if this team outperforms expectations. If it doesn’t, they should take calls on Aldridge. He’s really good, and there are a lot of impatient owners chasing immediate gratification. If opportunism meets desperation, the Spurs could fleece some rival and restock with a bundle of assets that better line up with Leonard’s timetable.”

Sure, San Antonio may be considered a tier below Golden State, but that’s likely the case for every other team in the NBA. The Spurs are one of two or three teams considered a legitimate threat to the Warriors in the playoffs, and Aldridge factors into that equation.

It seems unlikely that Spurs Head Coach Gregg Popovich and General Manager R.C. Buford would punt so close to the goal line, and Lowe says as much in his conclusion. He cites the Gasol signing as an indication that the Spurs are in win-now mode, and ultimately decides that a deal being worked out for Aldridge is unlikely. However, if the season goes sideways, it would make sense for the Spurs to at least entertain trade offers.

Lowe’s prediction was fairly tame and measured, but Jackie MacMullan had more provocative comments when asked whether or not the Celtics would trade their draft picks for an asset this year. After predicting surprising movement, MacMullan continued, “Sources were telling me the other day that LaMarcus Aldridge may not even finish the year with the Spurs. That experiment hasn’t quite worked out the way they hoped.”

Your browser does not support iframes.

If the Spurs hoped for more than a consistent double-double threat helping to lead the team to a franchise best win total in a transition year, that would be unreasonable. They didn’t win the championship, but the blame for that doesn’t fall solely on Aldridge’s shoulders. The on-court success doesn’t indicate that there are any issues between Aldridge and the team.

MacMullan’s most interesting and cryptic comments came when she was asked if she would trade for Aldridge.

“No… (laughing) not after what I heard the other day. No of course you would take him on if you could because he’s an automatic double double, but there’s just some things about him, there’s some stuff going on.”

MacMullan did not go into specifics, but she made it sound like there is something about Aldridge that isn’t sitting well with the Spurs. So what could that be? His low-key, down to earth personality seems to fit well in San Antonio. His overall production is down slightly, but he’s been more efficient in fewer minutes.

Aldridge has said that this is Kawhi Leonard’s team, and he’s just here to help him. Both players are important to the success of the team, but Leonard is younger, slightly more productive, and undeniably the fan favorite. Leonard grew up in the system and was molded by it, while Aldridge just arrived.

In Portland, Damian Lillard became the fan favorite, and there have been reports that Aldridge was bothered by that. When he got to San Antonio he found himself fifth on the fan favorite depth chart.

The Spurs hadn’t signed a star free agent in quite some time as Tim Duncan, Manu Ginobili, Tony Parker, and Kawhi Leonard all came up in the system. Spurs Nation treats them like family, and maybe Aldridge hasn’t felt that same affection because he’s more of an outsider than the other stars. He doesn’t have a Boris Diaw type of personality that endears him to fans, he just does his job. That means when he’s playing well the fans are happy, and when he has an off game they can be less sympathetic than they would be towards the Spurs lifers.

After a 120-90 loss to Golden State, Aldridge shut his social media accounts down. He claimed it had nothing to do with the game, that he just wanted to lock in. He got a lot of hate tweets after shooting 2-9 in the biggest game of the year. Nobody complains about Kawhi’s contract if he has a rough night, but armchair GM’s may find it easier to blame and question the new guy getting paid 84 million dollars. Sports fans are passionate, and sometimes that passion turns to anger that gets directed at athletes who we sometimes forget are human beings.

If that’s the mysterious issue that MacMullan is alluding to, it seems unlikely that starting over with a new team would make Aldridge happier. He’d be even more of an outsider anywhere else. The outcome that makes the most sense for both him and the Spurs is to stay the course, battle Golden State and try to win a championship. After all, the best way to win a fan’s heart is with a big shiny ring.