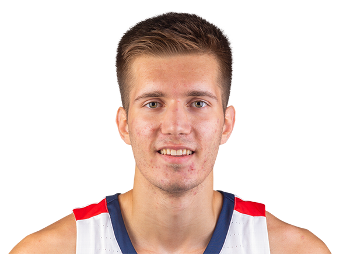 EDIT: Filip Petrusev withdrew from this year’s NBA Draft after this article had been written.

We are but one more week away from the NBA Draft. That means the rumor mill should start churning soon with teams at the top involved in those rumors. However, we are going to focus on a potential second round pick in Gonzaga big man Filip Petrusev.

The 6-foot-11, 235-pound bruiser is a traditional, back-to-the-basket big man. He moves well on offense though and isn’t a complete statue. He was the West Coast Conference Player of the Year and has played for Serbia in youth World Championships. Here are some of his stats from the previous season.

Petrusev would have likely been a high draft pick if he was born about 20 years earlier. However, the positives about him are that he is comfortable with both hands around the rim and has a great arsenal of post moves. He has the up-and-under, baseline spin, paint spin move, hook shot, and push shot to get a bucket pretty much whenever he wants.

The big man moves fairly well on defense to stay in front of his opponents and relies on positioning and anticipation. He is very much a below-the-rim defender as he doesn’t block many shots in the air. He uses his long arms and positioning to make that happen.

While his inside game is strong, Petrusev has a long ways to go in the mid-range and farther out. His free throw shooting percentage dropped significantly from his freshman to his sophomore campaign. He also got to the line considerably more often, so the percentage from this season is likely the more accurate one going forward. He has solid form, but it is a slow and set shot when he is outside of the paint.

Petrusev is very much a second round prospect in this draft. He’s a bit one-dimensional on offense and can likely only guard one position on defense, but he is quite excellent at what he is able to do. He could be a specific-use type of player if the Spurs are willing to spend a later pick on him and he could be a much different look on offense for a second unit that needs some paint scoring punch.