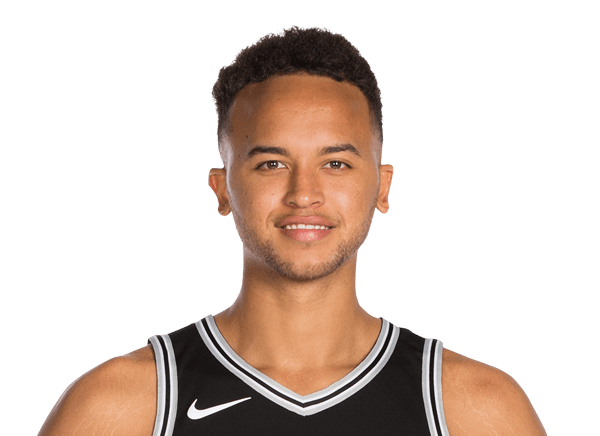 With 3:47 left in the fourth quarter Sunday of the San Antonio Spurs’ 110-94 win over the Cleveland Cavaliers, Jordan Clarkson used a crossover move to try to get by Kyle Anderson. But, like multiple ball handlers have learned this season, just because Anderson’s basketball nickname is ‘Slow-Mo,’ doesn’t mean you’re guaranteed to get by his length and precision on defense.

As soon as Clarkson used the right to left handed crossover and prepared to burst by Anderson, he was surprised to realize the ball wasn’t going with him, as Anderson swiped at the ball from Clarkson’s left hand and he completed the steal.

Since Kawhi Leonard has only been able to play in 14% of the Spurs’ game this season, Anderson has had to fill most of the starting small forward minutes. Anderson’s made the most of his expanded opportunity this season, as he’s averaging 8.2 points, 5.7 rebounds, 2.8 assists, 1.4 steals, and 0.8 blocks in 27.5 minutes per game.

Looking specifically at Anderson’s steals and blocks, there are different types of ways that Anderson combines his precision and instincts with his length to collect steals and blocks for his team on the defensive end of the floor. Let’s first visit a few of the ways he’s able to steal the ball.

The Face to Face Steal

If you watched Anderson’s games this season, this is the most common type of steal he makes. It’s when the ball handler (like Clarkson) is face to face with him, and then he tries to get by Anderson off the dribble. Anderson uses his length to avoid the foul and precise sense of timing in knowing when to swipe at the ball and the results are usually steals like this:

One of the other ways Anderson can add to his steals collection is by being a high IQ defender off the ball. Almost like a free safety on the court, Anderson has a good sense of how to get into passing lanes on the court and he has a solid instinct in sniffing out lazy or off-track passes.

When the ball handler gets by Anderson whether off the dribble or in a post-up situation, Anderson has good timing in getting sneaky steals by picking the ball out of the ball handlers hand when they’re not looking. This makes it difficult for post players to post-up Anderson. Not only can he can contest their jump or hook shots with his length, but also, while they’re backing him down, he can swipe the ball away.

Before the Spurs’ game at Cleveland, Anderson had been recording a steal percentage of 2.3%, per CleaningTheGlass.com. The steal percentage measures how many steals a player gets per team play. That 2.3% puts Anderson in the 95th percentile among forwards (3s and 4s in the NBA), which makes him elite at collecting steals at his position.

Sometimes when a player has high steal numbers, it’s because they gamble often and either have a high personal foul count or their defender often gets by them. The personal foul data shows just how solid Anderson is in making sure not to gamble too often at the wrong time. Per CleaningTheGlass.com, Anderson only commits personal fouls on 2.5% of his team’s defensive plays. That again makes him a very good defender in not fouling too much, since that number is in the 82nd percentile (very good) among all forwards in the NBA.

Whether it’s a player taking a jump shot or a player trying to finish at the rim by getting past Anderson, he’s shown the ability to swat shots and layup attempts in 1-on-1 situations. If Anderson’s guarding a player trying to take a jumper, he gives the player a bit of space and then when the player prepares to take the shot, Anderson relies on his length to try to get a piece of the ball. When ball handlers do get by him on drives, they may think they’re about to score on Anderson, but he uses his length and timing to recover and swat the layup attempt away.

When Anderson is playing defense off the ball, one of the ways he’s able to have a positive effect is by providing help defense either at the rim, or when a player gets by one of his teammates and tries to finish with a jump shot.

According to CleaningTheGlass.com, Anderson blocks 1.5% of the opposing teams shot attempts. That’s another elite level metric at the forward position, as Anderson is in the 89th percentile (very good).

While steals and blocks are only two metrics that measure part of a player’s defensive ability on the traditional box score, there should be other data that reflects Anderson’s presence on the defensive end of the floor. One of those data sets is the team defensive rating, or how many points per 100 possessions a team held their opponent to.

While Anderson’s overall production won’t match that of an All-Star or All-NBA player, he is showing that with consistent minutes and a stable role, he can be a very productive forward for a team on both ends of the floor. Defensively, he’s put together a file of guarding some of the better offensive players in the NBA and while he may not be an All-NBA first or second team defender, he can hold his own on the court against different players and as he’s showing with his stealing and blocking ability, he can create more opportunities for his team.

Anderson is putting together an all-around display of his play on both ends of the floor at one of the most important time-frames of his young professional career – just before he enters free agency on July 1.