t has been an amazing six months for boxing fans with Canelo Alvarez, Manny Pacquiao, and Anthony Joshua all fighting, as well as the third chapter of Deontay Wilder vs Tyson Fury. This Saturday, the world is in for another great match for Crawford vs Porter. The current WBO World Welterweight champion, Terence “Bud” Crawford (37-0-0, 28 KO) will look for a sixth successful title defense, this time from the challenger Shawn “Showtime” Porter (31-3-1, 17 KO), a former champion himself. It all goes down Saturday, November 20, 2021, in Las Vegas, Nevada at The Mandalay Bay Casino and Resort.

How to watch Crawford vs. Shawn Boxing


Crawford has defended his WBO World Welterweight Title five times, three times against undefeated challengers at 147 lbs since moving up from Super Lightweight (140lbs) where he had already unified against Julius Indongo in 2017 in his home state of Nebraska.

Porter is in the middle of a bounce-back after losing by split-decision to Errol Spence Jr. in 201, losing his WBC World Welterweight Title that currently sits in Crawford’s trophy case. Last August, Porter fought in his first bout since the loss, earning a unanimous decision victory over the previously undefeated Sebastian Formella. The win came with the WBC Silver Welter Title, which is not on the line on Saturday night.

In his last fight before the Spence card in 2019, Porter had defended his WBC World Welter Title from Yordenis Ugas, by split decision. If that name sounds familiar to casual boxing fans, it should. Ugas just defeated the legendary Manny Pacquiao in a welterweight bout in August. Pacquiao has since announced his retirement to further pursue his political ambitions.

Saturday, fans will be in for a treat with the title fight between Crawford and Porter. Despite having just a one-inch height advantage over Porter at 5’8”, Crawford will have a five-inch reach advantage at 74 inches. Able to work out of the orthodox and the southpaw stance, Crawford is just barely a month older than Porter, as both men just turned 34 years old this summer.

Where to Order Crawford vs Porter PPV in Canada

If you’re looking for Crawford vs Porter in Canada, you may face challenges trying to watch the fight. Only prelims fight will be available on TSN which cost will be $7.99, there are no alternativbe ways to watch Crawford vs Porter fight. In this case, we recommend you check out Fightpass, where you no need to use any VPN or ip hider and the best part you don’t need to pay any extra fee or cancel the subscription after purchase Fitepass PPV

How to watch Crawford vs Porter PPV in US


ESPN+ with Top Rank is producing the pay-per-view $69.99 fight between Terence Crawford and Shawn Porter on Saturday, November 20 in Las Vegas. To view the fight, fans will have to order through ESPN’s streaming platform. Alternative way you can checkout Fightpass

A non-contract, non-subscription service, Fightpass brings you the biggest events in sports and entertainment from around the world. Best of all, there’s no VPN required. Simply pay for the events that you want to watch, without forgetting to cancel a trial or pay for a channel package you don’t want. Fitepass will have all eight fights on Saturday night’s card on a onetime PPV plan

TALE OF THE TAPE 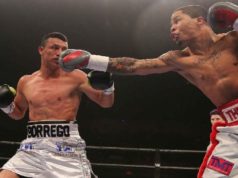 How to watch Davis vs Cruz Showtime Online fight in Australia