The San Antonio Spurs first possession wasn't anything groundbreaking. Tony Parker received a screen from Tim Duncan at the top of the arc and Miami trapped Parker aggressively. Duncan slipped into the lane and Parker fed him the pass.

Chris Bosh, defending Tiago Splitter on the play, dropped down for a beat to help on Duncan. Udonis Haslem quickly scampered from the top of the key, where he and Mario Chalmers corralled Parker, to the left block. Duncan took three confident dribbles before unfurling a right-handed hook into the net.

There was still a lot of basketball to play — 47 minutes and 40 seconds, actually. But the Spurs' onslaught was just getting started.

Game changing sequence: The Spurs led the entire second half until 37.8 seconds remained in the second quarter, when Dwyane Wade skirted past Manu Ginobili for a reverse lay-up that hit each part of the rim before falling in.

It just so happened to be the last time Miami even sniffed the lead. Parker nailed a fadeaway three in the right corner shortly after, Danny Green deflected LeBron James' shot, and Gary Neal knocked down a transition three-pointer at the buzzer.

San Antonio scored 69 points following Wade's bucket. The Heat scored just 33 points. Neal and Danny Green, meanwhile, scored 35 points on 18 shots (1.9 points per shot!!!!!!). James, Wade and Chris Bosh converted on 8 of 24 shots in that same span. Save for a late third-quarter rally — in which James himself tallied nine points in one minute and 30 seconds — the game wasn't even particularly close.

Two's a party: Green and Neal outscored the entire Miami team in the second half. They were also ridiculously efficient in doing so, nearly netting two points per field goal attempt. Also crazy: San Antonio made 10 of their 16 Finals record setting 3-pointers in the 16 minutes Green and Neal shared the floor.

The not so Big Threes: Miami's triad of superstars (James, Wade and Bosh) combined for 43 points. They were outscored by 22 points in the 29 minutes they shared the floor together, per NBA.com. San Antonio's trio (Parker, Duncan, Manu Ginobili) only accounted for 25 points, though Parker played just eight minutes in the second half because of an apparent hamstring injury. San Antonio still won by 36.

The primary difference is, on this particular night, Miami needed their best players to assert themselves offensively and the Spurs' offense didn't require consistent offensive sustenance from their best players. They just needed them to facilitate — Ginobili and Parker accounted for 14 assists, leading to 33 points — make quick decisions and capitalize on gaping holes in Miami's hyper aggressive defense. There were plenty of gaps. And they found them often.

— James isn't necessarily being "passive". He's taking the same amount of shots per game this series, but he's taking them from less efficient spots on the court.

— Exhibit A: James is averaging 5.3 shots per game inside five feet this series, down from 7.6 in the regular season. Despite San Antonio deliberately packing the paint to deter his avenues to the bucket, he's actually been more efficient (75 percent) when he does get into the teeth of the defense. That hasn't happened often enough, though.

— Green said postgame that much of the Spurs' defensive credit against James should be given to, oddly enough, James himself. He said James has settled too much thus far and the numbers support his claim. He's taking a whopping 12.7 shots per game outside five feet, up from 10.2 in the regular season. The Spurs continue to give him oodles of space on pick-and-rolls and he has lined up wide-open or semi-contested mid-range shots rather than generating a full head of steam and attacking the defense. What makes his shot selection even more indefensible: He's made just 9 of 38 shots (23.7 percent) from beyond five feet.

— James didn't get to the foul line in his 39 minutes. In James' 280 previous games in a Miami uniform, including playoffs, he's gotten to the line at least once in each game.

— Miami, sixth in free throw rate during the regular season, only created 10 free throws themselves, tying a season-low set on April 4 against Milwaukee (a 11-point victory).

After making just 36.1 percent of their shots as a unit in the first two games, the Spurs starters clamped down, especially on the defensive end. 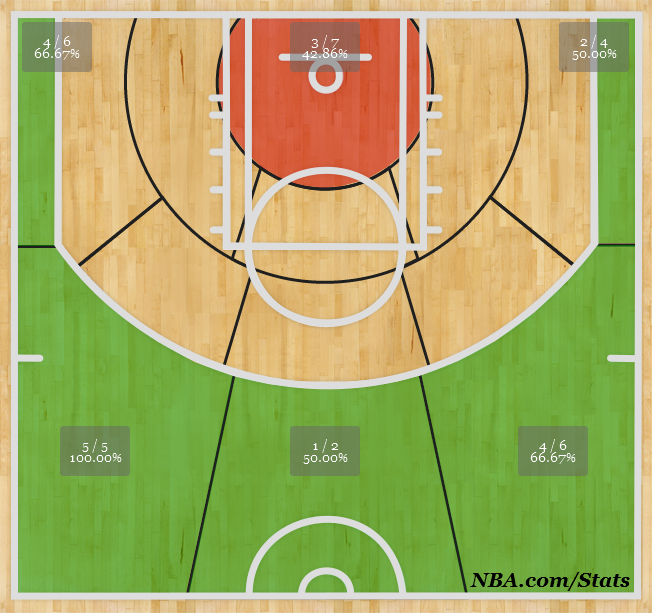 Yeah, that Green guy sure can put the ball in the basket, right?