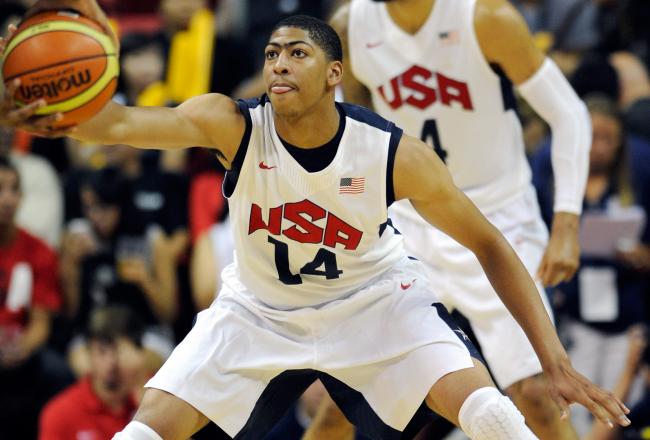 If you're in the San Antonio area over the next few days, keep your eyes peeled for a unique site.  It's a 6'10" really skinny guy, will most likely be wearing Nike gear and might even have a gold medal around his neck.  Need another tip? Fine, he'll have one eye brow.  That's right kids, the number one pick himself, Anthony Davis is in the Alamo City according to his very own Twitter page.

For the record, I said Rosario's in part because I assumed he was staying downtown.  Anyways, what on earth is "Unibrow" doing in the Alamo City?  Assuming there isn't some Team USA event in San Antonio this week (from what I can tell there isn't, but the USA Basketball website is terrible), my first and most logical guess was that Hornets head coach Monty Williams and his own personal Obi-Won Kenobi, Gregg Popovich, organized some work out sessions with Davis and Tim Duncan kind of like how Duncan worked out with Roy Hibbert, Nene and others last fall.  This theory was more or less confirmed when Hornets point guard Greivis Vasquez tweeted he was in San Antonio for a week of hard work.  But then, the plot thickened. Observe!

What the hell is happening in San Antonio? RT @antdavis23: @jharden13 you coming to San Antonio bro?

*James Harden in the Alamo City too?  What kind of odd facial hair convention is going on in San Antonio this week?  Could Harden also be coming in for a week of hard work?  Is the American Manu Ginobili going to learn how to be even more like Manu 1.0?  Maybe.  But here are some other possibilities:

*Editor's Note: Davis removed the tweet to Harden a few hours after he sent it out, so we used Trevor's retweet instead.

1. Spurs have acquired Davis, Vasquez and Harden for Matt Bonner, Tiago Splitter, Gary Neal and Nando De Colo. Fact No.1: This works in ESPN's Trade Machine. Fact No. 2: Pop and R.C. Buford would literally have to be Jedis in order to pull off this mind trick of a deal.

2. Harden and Davis are teaming up to be the next great Lucha Libre USA tag team.  Wouldn't Harden's beard and Davis' eyebrow make them an amazing tag team.  Harden could groom his beard in to a giant version of Jim "The Anvil" Neidhart and Davis could wear a lucha libre mask with the eyebrow section cut out.  Merchandise gold.

3. Harden and Davis are both taking a college course before the season starts and need to visit all of San Antonio's missions and write a report before they can get credit for the class.  I recommend a Rainbow Raspa from the vendor outside the Alamo.

Those are my guesses as to why they're here.  Remember to be on your best behavior if you see them, San Antonio.  Or kidnap them like Daniel Stern and Dan Akroyd in Celtic Pride.  Either way, don't let them leave.  Spurs could use a shot blocker, another slasher and a back up point guard.