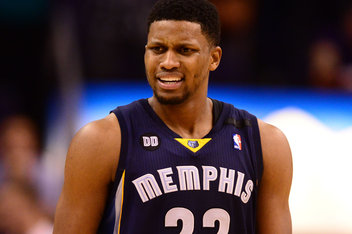 For a few years the Southwest Division was a battle between the Dallas Mavericks and the San Antonio Spurs. With the Mavs falling off, it’s become the Spurs and the Memphis Grizzlies.

Spurs fans won’t easily forget the eighth-seeded Grizzlies knocking them out of the playoffs two years ago, and now it seems like almost every time the two teams play it’s a battle. Two of the three games between the Spurs and Grizz so far this season have gone into overtime.

The Grizzlies continue to improve each year and they’ve become one of the teams you don’t want to meet in the postseason.

But now they’ve gone and done something drastic.

The Grizzlies traded away Rudy Gay in a three-team deal that also includes Detroit and Toronto. Gay will go to the Raptors along with Hamed Haddadi, the Pistons get Jose Calderon and the Grizzlies get Ed Davis, Austin Daye and Tayshaun Prince.

So Memphis loses their leading scorer and his 17.2 points per game in exchange for a few role players. I understand why the Grizzlies wanted to unload Gay. Yes, he scores a lot, but not necessarily in the most efficient manner. He’s only shooting 40% from the field this year, so he has to take a lot of shots to get his points. He also had a big contract, which wasn’t worth it for the Grizzlies to keep on board.

So while I do think Memphis solved a big problem in getting rid of Rudy Gay, they’ve created an even bigger one. The Grizzlies are 27th  in the league in scoring. They average 93.4 points per game and the guys they brought in aren’t going to make up for Gay’s contribution. Luckily for Memphis, they lead the league in points allowed at 89.5 per game. That’s how they’ve managed a 29-15 record.

Are the Grizzlies going to just focus on being defensive stoppers? Will they try to win games 84-80 for the rest of the season and in the playoffs? If that was their plan, I don’t think it’s the right one.

In a conference where you have the Spurs, the Thunder, the Clippers, the Nuggets and the Warriors, all averaging over 100 points per game, you can’t hope to slow all these high powered offenses down every night. In the West you need to be able to score points, a lot of them. The Grizzlies have just ensured that their offensive struggles will get even worse.

Maybe, in the long run, with more cap space to work with this could be a good trade for the Grizzlies, if they can bring in some more scorers. But for now, I think they’ve significantly weakened their team for the rest of the season. If you hadn’t already, might as well crown the Spurs the kings of the Southwest Division once again.