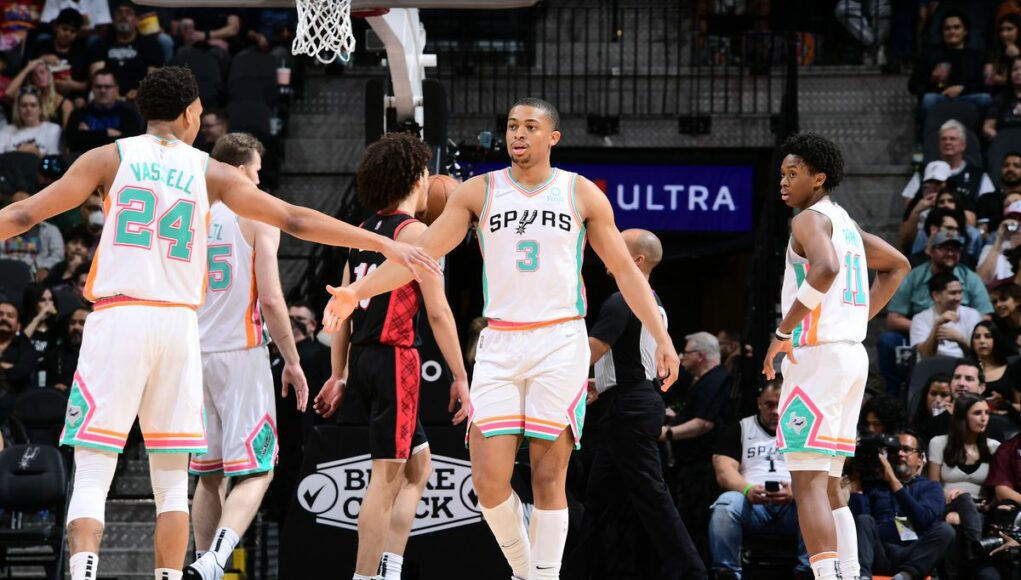 The San Antonio Spurs inched closer to a spot in the play-in tournament with a pair of wins over the Portland Trail Blazers over the weekend at the AT&T Center.

The victories combined with losses by the LA Lakers have put the ‘magic number’ for San Antonio to clinch a play-in berth at two games.

The San Antonio Spurs kicked off the weekend with a 130-111 victory over the Trail Blazers on April Fools Day but the win was no joke.

Devin Vassell had 22 points and Keldon Johnson added 21 points in the absence of Jakob Poeltl and Dejounte Murray, who missed the game with injuries. They were not needed as San Antonio had eight players score in double figures.

”I thought we played well,” San Antonio coach Gregg Popovich said. ”It’s a good mental test. We played them pretty well in Portland and they came back and they bust their (butt). (Portland coach) Chauncey (Billups) was that kind of player. He’s going to have high standards. They are going to work hard for him.”

Keon Johnson had 20 points for Portland, which lost its sixth straight.

The Spurs closed the weekend with a 113-92 win over Portland to strengthen their play-in hopes.

”If we don’t win, it’s different,” Johnson said. ”As long as we just take care of business and not really focus on anybody else, just focus on ourselves each and every game, we’ll be fine.”

Keon Johnson and Ben McLemore had 19 points each for Portland.

The San Antonio Spurs are now 33-45 on the season and will return to the court on Tuesday night to face the Denver Nuggets at Ball Arena.