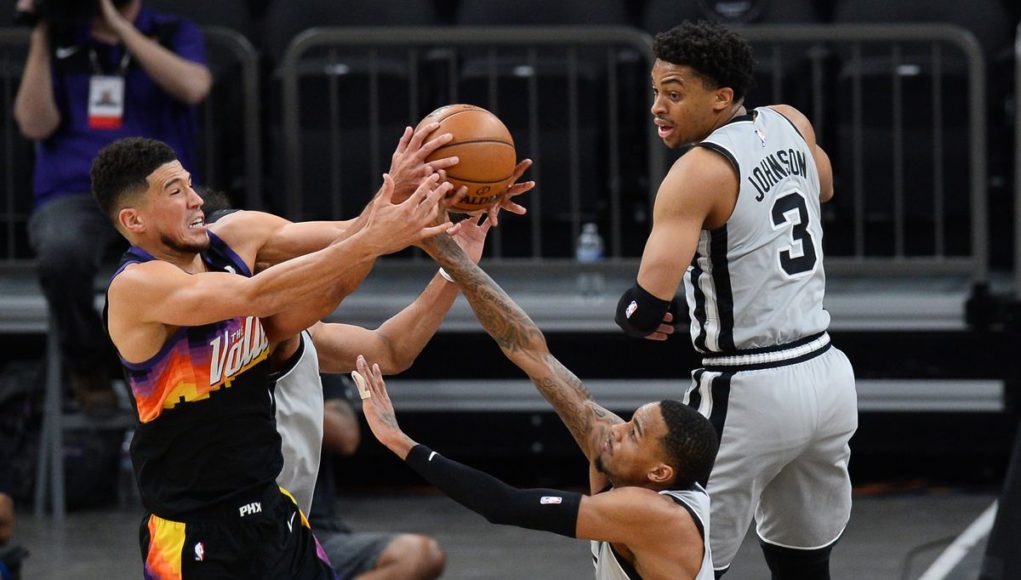 The 2020-21 season for the San Antonio Spurs has been one of twists and turns along with inconsistent play on the court. A prime example of that is this past weekend when the silver and black earned a split in a pair of games with the Portland Trail Blazers and Phoenix Suns.

In case you missed it, here’s a mini recap of both games from the weekend.

The Spurs opened the weekend with a 107-106 defeat to Portland. Despite San Antonio leading by 16 points in the second half, the Trail Blazers rallied by outscoring the Spurs 35-28 in the third quarter.

CJ McCollum scored 29 points as the took on the scoring load in the absence of Damian Lillard, who was a late scratch with a right hamstring strain. Norman Powell added 22 points and Anfernee Simons had 16 for Portland. Powell’s layup with 22.8 seconds remaining gave Portland the lead for good.

San Antonio had three different chances to grab the win but DeMar DeRozan missed a jumper, Rudy Gay missed a 3-pointer, and Jakob Poeltl got the rebound but missed a shot as time expired.

“We played hard the whole night,” Spurs head coach Gregg Popovich said. “But down the stretch, too many mistakes on the defensive end and a couple of turnovers.”

DeRozan had 24 points and Dejounte Murray had 13 points, 11 rebounds and 10 assists for the Spurs. Drew Eubanks had himself a solid night off the bench with 15 points and four rebounds.

The Spurs closed the weekend by thumping the second-best team in the Western Conference, earning a 111-85 win over the Phoenix Suns.

DeRozan, Poeltl, and Patty Mills all missed the game for rest. Despite that, the Spurs controlled the game from the opening tip and it resulted in their most convincing win of the season.

Gay scored 19 points, and Eubanks added 13 points and 13 rebounds in his first start of the season. Rookie Devin Vassell added 18 points, which included him going 4-for-6 on three-point attempts.

Devin Booker was the lone starter in double figures with 15 points on 6-for-18 shooting. Jevon Carter led the Suns with 17 points off the bench. Chris Paul struggled, shooting just 3-for-10 from the floor and finishing the game with six points.

The Spurs are now 27-28 on the season and will return to the court on Monday night against the Indiana Pacers at 7 p.m.