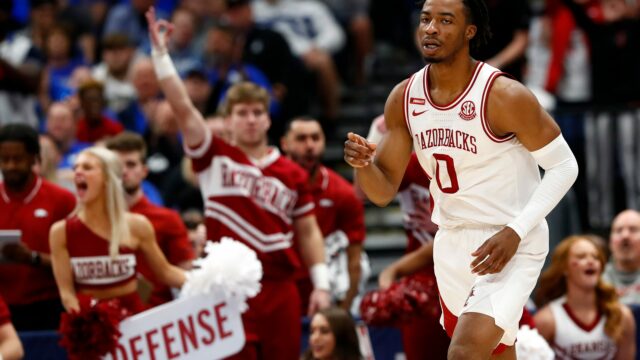 This particular matchup is going to be a somewhat popular pick as an upset. Part of that is the Catamounts being so good and the Razorbacks being so wildly inconsistent this season. Don’t be surprised if the little team from the America East upsets the big bad SEC team in this one.

How to watch Vermont vs. Arkansas Basketball

Arkansas fell victim to the Texas A&M run in the SEC Tournament as they bowed out in their second game of that week after beating LSU. Even before that, the Razorbacks had some uneven performances and have a penchant for digging themselves into big deficits early in games. That is not likely to bode well for Arkansas should they get in a hole against Vermont.

Vermont vs. Arkansas Odds and prediction

The Vermont Catamounts suffered only one loss in conference play and handily beat UMBC in the AEC title game 82-43. Vermont has won its last eight games in a row and 20 of its last 21 games. It’s safe to say the Catamounts are coming in hot to the tournament and will play confidently, even against a tough SEC squad like Arkansas.

The Razorbacks have some excellent players in JD Notae, Jaylin Williams, Stanley Umude, and Au’Diese Toney. They all average double figures in scoring, and are the big reasons why Arkansas has gotten this far with this seeding. What they truly excel at is getting to the free throw line 23 times a game and make about 17 of those, which is most in the country.

Vermont has two guys in Ben Shungu and Ryan Davis, who are the drivers of its offense. The rest of the regular minute getters are incredibly balanced and help the team shoot 49.3% from the floor and and a scorching 59.1% inside the arc.