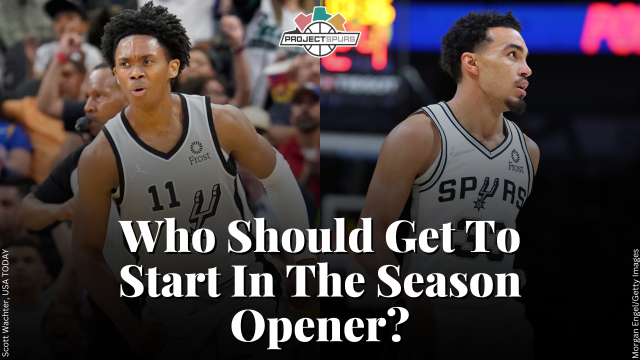 Now that the San Antonio Spurs have finalized their roster for the 2022-23 season we await the final answer to this off-season’s biggest question: Who will be the starting point guard? The two candidates are Tre Jones and Josh Primo.

With Primo sick with Covid-19 in the Summer League and injured for most of the pre-season, Jones took the helm and did a consistent job of creating shots for himself and his teammates. There was a debate about who should be the starter between the two players all off-season.

With the pre-season in the books, we have a clearer picture of each player’s capabilities. Based on pre-season performance, this Project Spurs contributor is betting on Primo getting the starting role. The final say is not up to me, so let’s look at each player.

Tre Jones had a strong pre-season performance and was the Spurs’ primary offensive creator. Not only did he find ways to get his team involved in the games, but he also created most of his own shots. During the pre-season, Jones started in every game and produced consistent numbers for each game.

Some fans take this as a sign that the head Coach Greg Popovich and the front office have faith in Jones to lead the team. Others will be quick to point out that Jones may not have started in each game in Primo wasn’t on the injured list.

In the 111-104 pre-season win over the Utah Jazz, Primo’s first appearance since the Summer League, Jones had the better performance. Jones scored thirteen points and 4 assists, while Primo only ten points, along with four turnovers. I think it’s important to give Jones his flowers because if he is given the starting position, he truly earned it by outworking everyone else.

Joshua Lincoln Alexander Primo made a huge impact in the last pre-season game against the Oklahoma City Thunder. While he of course didn’t start and played limited minutes due to a minor MCL injury he scored twenty-three points.

Primo scored the most points on the team and after the game, his teammates praised him in post-game interviews. Devin Vassell called him “A hell of a player.” Vassell and Keldon Johnson spoke on his aggressiveness. Saying that they want to see that in every game.

Can Josh Primo be the Spurs’ point guard of the future?

The 19-year-old showed off a tight, advanced handle against OKC.

His moves are quick, but his decision making might be quicker.

Primo has the ability to bring a new level of intensity to his game when it’s called for. While playing with the Austin Spurs his aggressive play and attitude had fans comparing him to the late great Kobe Bryant.

In his last Summer League game before catching Covid-19, Primo was able to score fifteen points in the fourth quarter like it was nothing.

Who Would You Start?

Primo has shown flashes of greatness last year and this off-season. It’s time to give him the reigns and see what he can do. Who do you think should be the starting point guard? Are you #TeamJones or #TeamPrimo

We’ll have an answer tonight in the Spurs’ season and home opener against the Charlotte Hornets at 7 PM CST. GO SPURS GO!