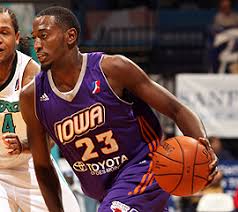 Just as Moses Ehambe was beginning to adjust and produce quality numbers for the Austin Toros the team decided to trade him to the Iowa Energy for guard Kyle Weaver.

Ehambe’s numbers in the month of February were mediocre at best (he scored a month high eight points against New Mexico on the 24th). However, in his last two games this week wearing silver and black, Ehambe was clutch and carried the team coming off the bench. In Wednesday’s game he led all in scoring with 37 points (9-11 from beyond the arc). The next night his ability to shoot long jumpers continued as he was 5-5 for 3-point shots and contributed 21 points.

So what are the Toros getting out of the trade?

Weaver appeared in 21 games this season for the Iowa Energy, 20 of which he started. He’s currently averaging 16.6 points, 5.9 rebounds, and 3.5 assists a game.

Weaver will make his first appearance for the Toros during Saturday’s matinee game against the Sioux Falls Skyforce.