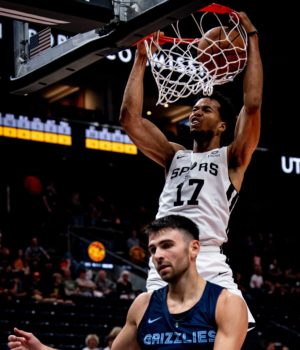 The San Antonio Spurs closed out the Utah portion of their Summer League schedule with an 82-77 loss to the Memphis Grizzlies at Vivint Arena on Friday night.

San Antonio opened the game strong, leading 22-14 after the first quarter. However, Memphis picked up their defense in the second, allowing just 11 points from the Spurs. The Grizzlies outscored San Antonio 21-11 to take the lead into the locker room.

The Spurs trailed by as many as 22 points but rallied to make a game of it in the fourth quarter. However, it would not be enough as Memphis held on for the narrow five-point win.

Here are three takeaways from Friday’s game against Memphis:

When the Spurs selected Josh Primo in the first round of the 2021 NBA Draft, Spurs fans were up in arms and confused as to what the front office was doing. However, after his Summer League performance in Utah, he’s out to prove every doubter wrong.

Primo scored 17 points on 7-of-17 shooting to go along with three assists and a rebound. He looked much more comfortable as he adapts to NBA play and will only get better with more experience he gets.

“Can we talk about Primo?,” Spurs forward Devin Vassell said. “At 18 years old to come out here and play with that much confidence…He has so much potential. I don’t think he even knows how good he is or how good he can be. I’m really high on him.”

Speaking of Vassell, his game has improved and will be interesting to see if he goes with the team to Las Vegas. Vassell scored a game-high 27 points but shot just 36 percent from the floor.

His defense and overall offensive game looks solid in Summer League and he will be a massive part of the Spurs’ transition into the youth movement, so it will likely be a welcome sight for the coaching staff.

Vassell said he put in work over the summer.

“I don’t want to spill a lot of beans, but I think you all are seeing some of the stuff right now,” he said.

Lastly, rookie guard Joe Wieskamp has not had the same fortunes as Primo. He’s struggled in the Summer League as every rookie does when they are adjusting to the NBA game.

There is no doubt that Wieskamp has the shooting ability and grit to be a solid player in the league but it will take development and work. That is why I feel it is highly likely that the former Iowa Hawkeye will get a 2-way contract and will be spending the majority of his season with the Austin Spurs.

The Spurs will resume Summer League play in Las Vegas on Monday.