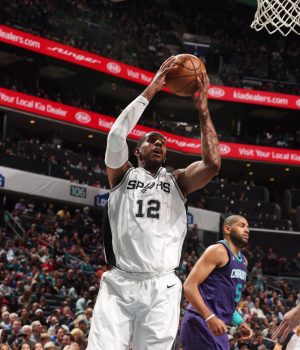 The victory saw the Silver and Black get the split on their two game trip after falling in New Orleans on Wednesday night. San Antonio six players in double figures and used a 34-28 fourth quarter to pull away.

Here is what went good and bad for the Spurs on Saturday as well as three standout players: LaMarcus Aldridge, Pau Gasol, and Kyle Anderson.

LaMarcus Aldridge: With the Spurs struggling in the first quarter, they went to their offensive work house in the second 12 minute period. Aldridge finished the game with 17 points, seven rebounds, and four assists in 33 minutes.

Saturday was the 19th time in the 19th game that Aldridge has scored in double figures. The Spurs forward was no match for the defense of Charlotte’s Dwight Howard or Frank Kaminsky. If Aldridge continues to play this way, Kawhi Leonard can afford to miss an extra week or so in his return to the court.

Pau Gasol: The veteran NBA center helped out Aldridge in the paint and showed why Spurs coach Gregg Popovich continues to show confidence in Gasol. Like Aldridge, Gasol finished with 17 points as well, adding seven rebounds and three assists.

Together, Gasol and Aldridge combined for 34 of San Antonio’s 106 points in the game. Gasol showed why Pop and company still value him as one of the best veteran centers as he stood tall and was a massive defensive presence to help out Aldridge with Howard in the paint for Charlotte.

Kyle Anderson: The former UCLA Bruin continues to have the best season of his young career stat wise. Anderson finished with 14 points on 6-of-8 shooting to go along with five rebounds and three assists.

The stats show why Pop continues to place his trust in Anderson, constantly letting him run the San Antonio offense and show off his point guard skills in the process. To have a high IQ player like Anderson in the lineup when Leonard and Tony Parker return from injury is only going to make the Spurs even more dangerous.

Up next: The Spurs are now 12-7 on the season and will return to the court on Monday night when they welcome the Dallas Mavericks to the AT&T Center at 7:30 p.m.