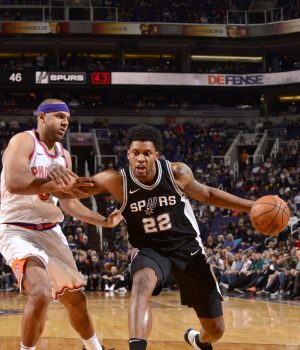 The San Antonio Spurs opened their three-game road trip with a thrilling 104-101 over the Phoenix Suns (9-19) at Talking Stick Resort Arena on Saturday.

What made the victory so impressive is San Antonio won without six of their main players. Pau Gasol, Manu Ginobili, Tony Parker, Danny Green, Kawhi Leonard, and Kyle Anderson will missed Saturday’s game. Which saw the younger players get much more valuable experience on the floor.

Here what went good and bad for the Spurs, as well as three standout players: LaMarcus Aldridge, Patty Mills, and Bryn Forbes.

LaMarcus Aldridge: The Spurs forward put the team on his back once again, going up against a Phoenix club with no significant big men made it a somewhat easy night for Aldridge. He finished with 20 points on 7-of-18 shooting to go along with nine rebounds.

With key players out, the Spurs’ second unit got to learn how to play with Aldridge. Davis Bertans found LMA for a dunk off a nice bounce pass in the paint in the third quarter. Bryn Forbes also had a nice pass to Aldridge for a score as did Brandon Paul. By now, we all know what LaMarcus can do, but to have other keys get major minutes on the floor with him? That will only helpful for Coach Pop as the season goes on.

Patty Mills: As I said in the ‘good’ portion of the recap, Patty Mills showed fans exactly why the Spurs re-signed him to a $50 million contract in the offseason. Mills played one of his better games of the season, scoring 20 points and hitting three of his four three-point attempts.

Mills hit back-to-back three pointers in the game, seeming sparking his play. He went to the rim for lay ups and took the defender off the dribble to free up space for his shot. If anything, Mills looked extremely confident out there and did not rush his shot. Let’s hope that Saturday’s performance can turn things around for the fan favorite guard.

Bryn Forbes: Just like last night with Manu Ginobili, anytime you hit a game-winner, you’re going to be a standout player. Bryn Forbes grew as a player on Saturday night, possibly the most growth of his young career.

With the Spurs on defense, Forbes fouled Phoenix’s T.J. Warren, sending him to the free throw line. He would make the shots, putting the Suns up 101-99. On the next possession, Forbes drills an open three pointer from the wing, giving the Silver and Black the lead for good. Mills would ice the game with a pair of free throws.

What makes this game significant for Forbes is how he responded. After the foul, he was upset with himself. But he did not pout. He came right back and hit the biggest shot of the night for the Spurs. We saw him earlier in the game upset that he missed a pair of free throws as well. That passion will make him an even better player.

The Spurs are now 19-8 on the season and will return to the court on Tuesday when they take on the Dallas Mavericks at 7:30 p.m. from the AmericanAirlines Center.

Check the latest spreads at the best online sportsbook usa.