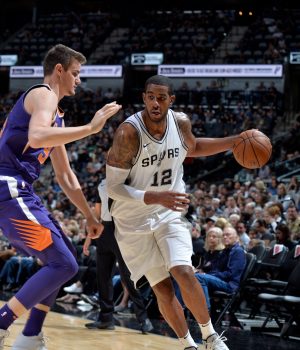 SAN ANTONIO – The San Antonio Spurs used a solid third quarter to pull away and defeat the Phoenix Suns 112-95 at the AT&T Center on Sunday night.

The game saw eight Spurs in double figures, led by LaMarcus Aldridge’s 21 points. The win saw the Silver and Black get two consecutive wins for the first time since October 21 and October 23 against Toronto and Miami.

Here is what went good and bad for the Spurs and their three standout players: Patty Mills, Bryn Forbes, and Brandon Paul.

Patty Mills: The Aussie guard continued to earn his $50 million pay day from the Silver and Black. Mills continues to shoot the ball well, scoring 17 points and hitting 3-of-5 from three-point range.

Mills was aggressive and showed confidence with his shot. It seems that all Patty needed was some time to develop and get his rhythm back in form. This will be ever more important as Tony Parker gets closer to returning from injury.

Bryn Forbes: The second year guard was consistent for the second straight game for the Spurs, scoring 12 points and hitting 50 percent from beyond the arc. While Dejounte Murray looked inconsistent for the past few games, it was Forbes who took advantage of his playing time.

Forbes’ and Mills’ play has been key for the Spurs in the past two games and Pop may have found a new combination he can go to later on in the season once Parker and Leonard return to the court.

Brandon Paul: Fans may have a new fan favorite if Brandon Paul continues to play as well as he did on Sunday. The rookie finished with 11 points on 4-of-6 shooting, including 2-of-4 from three point range.

The Spurs coaches have constantly praised Paul, calling him Jonathon Simmons 2.0, but better offensive player. However, it was Paul’s defense that shined on Sunday. He had three steals and two of those had a Kawhi Leonard feel to it.

If Paul continues to raise his game, he could be a big X-Factor for the Silver and Black down the line.

Up next: The Spurs are now 6-4 on the season and will return to the court on Tuesday when they welcome Blake Griffin and the Los Angeles Clippers to the AT&T Center at 7:30 p.m.