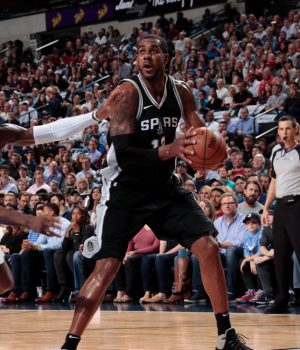 The San Antonio Spurs kicked off the first game of a back-to-back set with a 97-91 victory over the Dallas Mavericks at the American Airlines Center on Tuesday night.

While it was not pretty, the victory was the second straight for the Silver and Black. LaMarcus Aldridge once again put the team on his back and carried the Spurs to the win, but also got some much needed help from the San Antonio bench.

Here is what went good and bad for the Spurs as well as three standout players: Aldridge, Patty Mills, and Manu Ginobili.

LaMarcus Aldridge: The Spurs forward continues to carry the offensive load for the Silver and Black with Kawhi Leonard out. Aldridge finished with a season-high 32 points to go along with five rebounds and four assists. He stayed aggressive despite Dallas’ double teams early and often in the second half.

What highlighted Aldridge’s performance on Tuesday was his ability to find the open man. He showed shades of Spurs legend Tim Duncan by kicking the ball to an open Patty Mills when the double team came. If Aldridge can keep up this level of play when Leonard returns from injury, the Spurs can become a legit threat to the Golden State Warriors and Houston Rockets in the Western Conference.

Patty Mills: The fan favorite and Aussie guard has struggled to begin the 2017-18 season, going from hot to cold on a game-by-game basis. However, Tuesday may have seen Mills turn a corner and give him the confidence he needs to get back into form.

Mills finished with a season-high 19 points on 7-of-13 shooting and hit big shots when the Spurs needed them. He stayed his aggressive self on the defensive end and stayed aggressive on offense, driving the paint and forcing Dallas’ guards to come out and guard him on the perimeter, freeing up Aldridge.

Manu Ginobili: With the Spurs struggling to score in the third quarter, Pop inserted Manu for the first time all game. The move paid off as he sparked the Silver and Black’s offensive run as the Spurs took an 11 point lead over Dallas.

Ginobili finished with 13 points off the bench on 4-of-7 shooting and showed that even at age 40 how important he is to this Spurs squad. Ginobili drove the paint, hit a huge three-pointer, and made some key assists to Pau Gasol and Aldridge for buckets.

Up next: The Spurs are now 9-5 on the season and will return to the court tomorrow night when they finish their back-to-back set against Jimmy Butler and the 8-5 Minnesota Timberwolves at 7 p.m. at the Target Center.