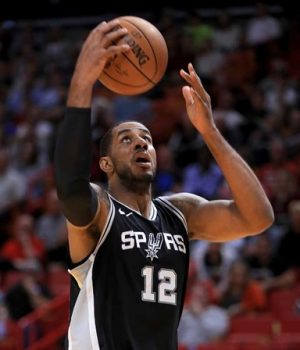 The San Antonio Spurs closed out their four-game road trip with a 108-94 loss to the Boston Celtics at TD Garden on Monday night.

The loss was the third straight for San Antonio, who continue to have defensive woes. Below is what went good and bad for the Silver and Black as well as three standout players: Brandon Paul, Rudy Gay, and LaMarcus Aldridge.

Brandon Paul: The rookie forward got significant playing time on Monday and had his best showing yet. Paul finished with a career-high 18 points on 6-of-8 shooting and shot 75 percent from three point range.

Paul’s shooting may have been better than advertised and he continues to show fans why the Spurs’ coaching staff was so high on him during training camp and the preseason. He converted a corner three-pointer and was fouled to complete the rare four-point play. Paul had a block on Marcus Smart and had two assists and a steal.

Pop likes to have his players earn their playing time and it’s highly possible Paul may be on the floor more often as the season goes on.

Rudy Gay: The newest Spur finished with 14 points off the bench and did his best to help get Boston’s swarming defense off of LaMarcus Aldridge. With Leonard still out, the Celtics set their target on Aldridge to double team and make his life uncomfortable on the floor.

Gay did his best to provide help for LaMarcus as he pulled up for three’s, slashed his way through the paint, and got to the rim.

LaMarcus Aldridge: The Spurs forward did not have the best game, but still contributed despite an aggressive Boston defense. Aldridge finished with 11 points on 5-of-13 shooting and five rebounds.

The good news is Aldridge and Gay continue to have solid chemistry on the court together. The pair found each other for buckets and passed the ball well. Both players being in sync will likely be important once Leonard comes back from injury and is rusty as expected.

Up next: The Spurs are now 4-3 on the season and will return to the court on Thursday when they open a six-game homestand against the Golden State Warriors at the AT&T Center at 7 p.m.