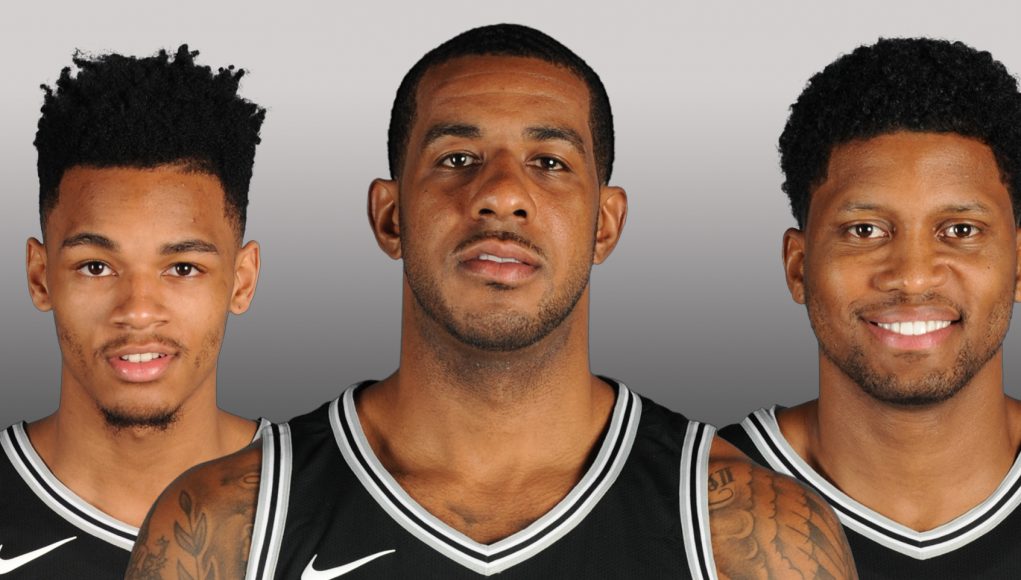 The San Antonio Spurs begin their 2017-18 NBA campaign tomorrow night against the Minnesota Timberwolves. But before tip-off, I wanted to address some key questions facing the Spurs, especially after most observers have said the Spurs mostly stood pat in the offseason.

1. Is Dejounte Murray ready to take the next step? I remarked several times during the playoffs that the minutes Murray was getting would be crucial to his development. Once Tony Parker was injured, the Spurs looked to Murray to steady the ship, allowing them to keep Patty Mills in his pivotal role off the bench. Murray struggled at times, but the struggles for a young player are often as important as the successes.

Murray is entering this season in the same situation. While Parker’s recovery timeline has moved up to November, Murray will still be manning the point for some important early games.

He was a proverbial gym rat during the offseason, and though he struggled at times in Summer League, some strides were apparent, and even more evident during the preseason. Murray is an athletic speedster, whose biggest weapon is his ability to quickly penetrate through the defense and finish at the rim, but amongst a lineup of veterans, he seems to have a different approach and has worked on his point guard skills. In transition, he’ll likely look to use his speed, but in half court sets, he has shown more growth as a playmaker.<

Preseason is one thing, the regular season is a different animal. The pressure is on a different level, but that’s where Murray starting in the playoffs was important. He had a chance to grow accustomed to that pressure. Sometimes he succumbed to it, and while as a young, developing player, there will be expectations for bumps in the road and occasional miscues, he’ll have to take that next step and show he can handle the pressure, especially with the mainstay at point guard out for the time being.

2. Can Aldridge flip the switch? LaMarcus Aldridge’s short Spurs career is a polarizing topic. Even some of our writers have debated it on Twitter. When it comes to Spurs fans, there seems to be no middle ground in the Aldridge venn diagram. Either you are putting up a billboard in his honor or you wish he was traded for a player on the G-League/NBA bubble.

I’m taking it to extremes obviously, but the Spurs’ recent extension of Aldridge tells you everything you need to know about his future in San Antonio.

Looking only skin-deep – or stats-deep – on Aldridge doesn’t tell you the whole story, as is usually the case with stats. One look at a 17 and seven stat line without any context probably tells you that Aldridge had a good year. But where Aldridge has drawn the ire of Spurs fans has been his lack of consistency, especially in playoff games.

A four point, six rebound night in a lopsided Game 1 loss of the Western Conference semifinals against Houston isn’t going to win you many fans. But Aldridge did bounce back in a crucial Game 6 against the Rockets with Kawhi Leonard sidelined. He finished with 34 points, 12 rebounds and two blocks in a closeout game, and followed that up with 28 points and seven rebounds in the opening game of the Western Conference Finals against the Golden State Warriors.

The trouble with that is that what followed in that series were two eight point performances in double digit losses. I’ve argued that Aldridge was being guarded by the defensive player of the year during that series, but Spurs fans expected Aldridge to step into a role he hasn’t had to play since before he was joined by Damian Lillard in Portland.

The right things have been said in training camp and Aldridge’s performance through preseason games has shown improvement after he reportedly had a “heart-to-heart” with Spurs coach Gregg Popovich and Popovich worked to integrate Aldridge into the offense.

With Leonard still out, the spotlight will be placed directly on Aldridge and the expectation will be for him to perform and take over the offensive load. Then the test will be how he adjusts once Leonard returns to the lineup.

3. Will Gay, Lauvergne and Paul additions be enough to get San Antonio back to the Western Conference Finals? As stated above, the common knowledge on the Spurs is that they mostly stood pat this offseason and did not do enough. Losing Jonathon Simmons, Dewayne Dedmon and David Lee did nothing to calm the nerves of Spurs fans, and signing a 16-year veteran like Pau Gasol to a multi-year extension didn’t help matters either.

But the Spurs have stayed relevant and remained a contender because of their ability to make under-the-radar moves. Bringing back Manu Ginobili does more for the team than his numbers last season can speak to. He’s a leader with a career’s worth of corporate knowledge that may be his most important asset, and something that could not have been replaced if he chose to retire.

Getting an offensive sparkplug like Patty Mills back on the books was also an important move, and having Mills and Ginobili together in the backcourt of the second unit gives the Spurs some much-needed flexibility, especially when you’re adding in new pieces. The players complement each other very well, with Ginobili’s ball distribution abilities allowing Mills the opportunity to come off screens to sink long-range jumpers.

Now let’s get down to the completely new additions. The Spurs were tied to several high-profile players, including Chris Paul, but the reality of landing some of those players was never really on the Spurs’ side. Rudy Gay is no Chris Paul, but Gay’s addition may be one of the more underrated moves of the offseason. He’s coming off a serious injury, but he also has something to prove.

He will have to adjust to a new role in San Antonio along with adjusting to the new system, but Gay is a capable scorer and has recently shown that he still has plenty of athleticism left. Popovich’s ability to weave players into the team is a positive for Gay. He won’t be the 17-20 point a night player he’s been for most of his career, but playing for a Western Conference contender could mean a resurgence for Gay, even if not apparent in his stats or fantasy value. He will benefit joining the aforementioned second unit players, and he provides the Spurs with abilities they haven’t had at the backup small forward position.

It hasn’t taken long for San Antonio to fall in love with Joffrey Lauvergne the way the city fell in love with Aron Baynes and Boban Marjanovic. He has also drawn comparisons to both Boris Diaw and Tiago Splitter. As Paul Garcia has pointed out in his preseason post-game impressions, Lauvergne has adjusted quickly and has made an impact off the bench immediately. His passing and screening ability will keep the offense flowing, and he’s been able to get it done on defense as well.

Lauvergne has had trouble finding a home in the NBA, and while it’s still very early, he could find a home in San Antonio and be another one of those under-the-radar signings that surprises everyone.

Brandon Paul is still a bit of an unknown as far as what he can provide because of limited opportunities in preseason play, but he’s shown some flashes. Some have compared him to Simmons with a better touch on his jump shot, but that’s a tough comparison. Simmons played in the Spurs’ system in the G-League for years and his transition to San Antonio was rather seamless.

Paul can guard several positions and he’s capable of making flashy plays, but his role and contribution are largely still unknown.