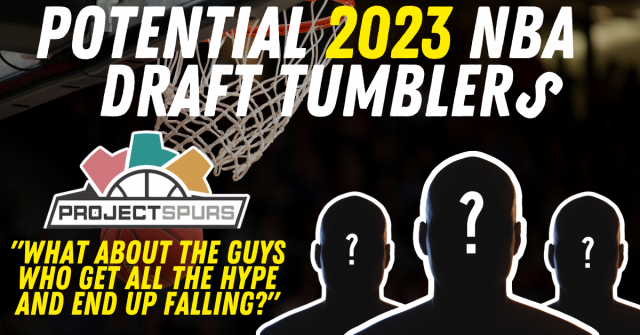 Every NBA Draft has its fair share of sleepers who end up getting picked earlier than expected. In fact, we think there are so many we made two lists (here and here)! But what about the guys who get all the hype and end up falling? Those players who are projected as first-rounders or lottery picks end up getting taken much later. The NBA Draft Tumblers.

We are here to predict some of those players in this year’s draft. So that we are perfectly clear, this is a list of players I believe may take a tumble and not necessarily through any fault of their own.

Some of the reasons for a tumble could include the hype being too great, a poor collegiate season (which may be their fault), or just other guys playing great throughout and up to the end of the season. To get us started is the player most often mocked as the third pick in the draft?

I cannot stress enough that Nick Smith is going to be an excellent player and should be fun to watch at Arkansas this season. However, because of the hype surrounding him, I believe he may not be able to live up to it. He will also have to integrate with a lot of new players at Arkansas. The chemistry could be off and that could greatly affect his game.

If all goes well, Smith will be an excellent combo guard at 6-foot-5 and 185 pounds. He can score almost at will, is shifty, and has a quick first step. He can shoot from all over the floor and could be unleashed as a solid two-guard if needed.

The 7-foot-1, 230-pound freshman was the top-rated prospect in the 2022 recruiting class. In most years that means he’s the presumed top pick. With Scoot Henderson and Victor Wembanyama, that just isn’t the case. Lively is a great rim protector and an excellent athlete but is not a proven shooter right now. That limit is going to be a big one with the NBA game becoming more reliant on those kinds of big men.

However, the flip side of that coin is he shows how his range has expanded and meets the hype of being a consensus top-10 pick. He is a lob threat and can be effective in pick-and-rolls, he is a better mover on defense than advertised and shows off a polished post-game.

The 6-foot-7, 220-pound wing has many scouts and front offices drooling with his athleticism, open-court abilities, and a great frame. However, he fractured a foot back in August. He will miss only the beginning of the season if he misses any games at all. This is the major reason why he might fall. The Duke staff could be incredibly cautious with him and he may have limited minutes in the first games of his season.

He will likely have to climb uphill to get “back” to the top 5 of the mock draft boards as the season goes on. He will have to show more consistent three-point shooting as well. Whitehead has been putting in a ton of work on that end and hopefully with the time off due to injury, he can pick up right where he left off in his shooting.

The 6-foot-7, 232-pound forward has a major advantage over some of his competition in that he will still be 18 by the time the draft rolls around. However, he is walking into a situation with a new head coach at Villanova in Kyle Neptune. He was part of the Villanova system as an assistant but has not been a head coach at the Big East level.

Breaking in a new coach with the expectation of being a one-and-done player could prove to be difficult for Whitmore. He has all the athleticism and explosiveness you like to see. He’s also one of the most powerful dunkers we will see in college basketball this season. But he has to prove his perimeter offense is for real and can be consistent.

Who are your NBA draft tumblers?