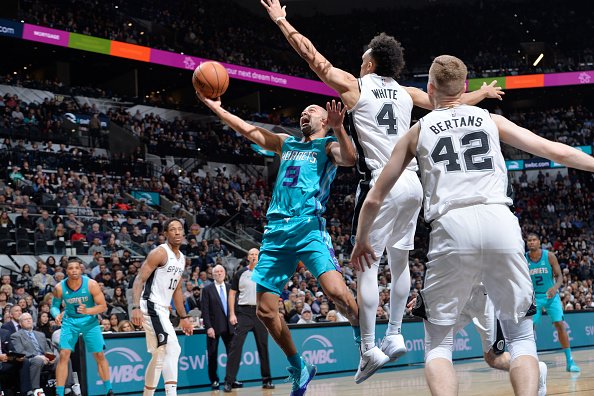 Prior to this season, in the last 15 years, the San Antonio Spurs’ defense has only been ranked outside of the Top-10 once according to CleaningTheGlass.com.  Then, it was the 2011-12 season, when the Spurs barely missed the Top-10, ranking 11th that year, by allowing the opponent to score 103.3 points per 100 possessions.

Today, the Spurs are on track to set one of their worst defensive rankings in the last 16 years, as they are allowing opponents to score 111.5 PP/100, which ranks them 22nd. There were several factors why a Top-10 defensive expectation was likely not expected this season:

A) Losing key defensive players in Kawhi Leonard, Danny Green, and Kyle Anderson in the offseason

However, with all that said, the Spurs have shown that they can lock down opponents and play Top-10 level defense for a time frame. In this 9-game segment breakdown of the Spurs’ defensive rating, the graph shows how the Spurs’ defense has been like a roller coaster so far this season.

After hovering in the 17th to 20th ranking through their first 18 games, the Spurs’ defense was at its worst in late November to early December, when they were ranked dead last in the league during that stretch. Then, with the homestand beginning in mid-December, the Spurs found themselves playing 4th to 10th ranked level defense for a period of 18 games. Lately though, from mid-January to today, the Spurs’ roller coaster on defense is starting to head in the wrong direction again.

There are two lenses to examine the Spurs’ defensive slide in the last nine games, where they’re ranked 24th; are they just regressing back to being a bottom 10 defense like their 22nd overall ranking suggests, or is it due to the lack of team chemistry after the injury bug visited the team in January and has carried on?

Over the last nine games, two of the Spurs’ nine key rotation players have missed games in Davis Bertans (2 games) and DeMar DeRozan (4 games). The backup center position also hasn’t been consistent as Pau Gasol is slowly getting inserted into different lineups, while Jakob Poeltl has only been playing 10.8 minutes per game in the last nine games.

Throughout the season, Spurs Head Coach Gregg Popovich has mentioned the words “consistency” and “repetition” as two of the key components of improving defensively, especially with a team that has several new rotation players.

“Defense is a matter of repetition, forming habits, changing some habits, and we hope that we’ll continue to improve,” said Popovich on December 7, just when the team was about to go through one of its best defensive stretches of the season. “Some nights we do it very well and other nights we don’t.”

When asked about communication, Popovich responded, “That’s part of it. It’s not just a system, it’s them reacting to each other and trusting each other, communicating with each other. You just keep working at it.”

Lately, the Spurs are back trying to find that consistency that they had on defense from mid-December to mid-January.

“Our defense was not very good,” said Derrick White in a recent win over the Phoenix Suns, when the Suns put 124 points on the scoreboard.

“I think we’re just not as physical as we were when we were really playing well. We have moments when we’re doing the right things, but we haven’t been consistent with it,” continued White.

“Everybody in here wants to win and we know defense will help us win. We just have to get back to the basics.”

As the Spurs begin their annual Rodeo Road Trip on their way to their final 28 games of the season, the question will be does that roller coaster defensive cart continue inclining (bad defense) or does it start to go back downward to show the Spurs playing Top-10 level defense again?