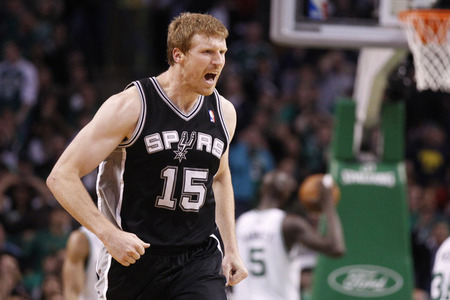 San Antonio Spurs fans know one side of Matt Bonner — the guy at the 3-point line ready to launch a shot.

Outside of the court, the "Red Rocket" is a far different personality and if you've seen his "Coach B" videos, that personality is a little on the goofier side of life.

Nadia Bonner, Matt's wife of four years, gave an interview with UnionLeader.com to describe some characteristics that Spurs fans might not know about him, even the "groupies" he attracts outside the court.

"My husband is way too committed to printed T-shirts, jeans, and grey New Balance runners, for me to influence his fashion choices."

Matt's the only player in the whole NBA to sport New Balance basketball shoes, so it shouldn't surprise he's a major billboard for them outside the court. Perhaps the most important thing we don't know about Matt Bonner is the age group that finds him "more dashing" in person than on the basketball court. Nadia Bonner gives us a glimpse of the "stiff competition" she's against when Matt's in public and being flirted with.

As I mentioned, Matt's fans really relate to him and appreciate his laid back attitude. However, he probably has his biggest fan base in the over-60 crowd. True story. Just the other day he was surrounded by a group of older women who told him that he was far more "dashing" in person.

The Spurs have been called "old" for a number of years in the NBA, so this statement by her shouldn't surprise anyone.

On the court, Matt is a shooter with deadly accuracy. When he puts his uniform away, he's lusted after by a huge number of grandmas and you can only hope Nadia Bonner has the trust in her husband that he doesn't let this go to his head. After all, she lets us in on how he used his "heartthrob skills" at catching her eye.

There may have been mention of a lightening bolt striking him, and my comparison to it.

We're seeing a side of "Coach B" we've never seen before in this interview and it helps us appreciate the uniqueness of having a guy on the team who can lift his teammates spirits and also play a part in winning games, something not a lot of players who are at the end of the bench can say they have.

The Spurs keep guys who are class acts on and off the court, even some with a little "bad boy" side in them (Robert Horry and Stephen Jackson for two). From what we've read, Bonner may be both with how he's breaking a lot of elderly hearts around San Antonio.