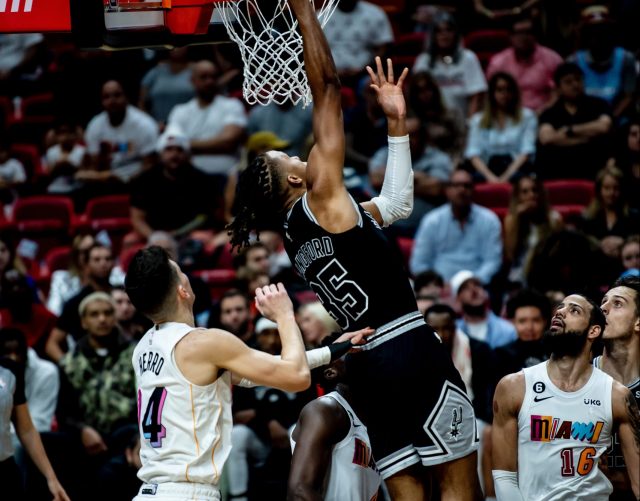 One more and it’s called a streak. The San Antonio Spurs picked up their second consecutive win Saturday night in Miami, defeating the Heat 115-111. Both teams scored with relative ease, but key mistakes kept their opponents in the game. In the end, the Heat (12-15) made just one more than the Spurs (8-18), letting San Antonio escape with the victory.

Jimmy Butler had a great night for the Heat, leading all scorers with 30 points, bolstered by his 12-point second quarter. Miami swept the game-highs in major categories behind Butler’s points, with Tyler Herro totaling seven assists, and Bam Adebayo grabbing nine rebounds. Keldon Johnson paced the Spurs with 21 points, 11 of which came in the third quarter with San Antonio protecting a two-point lead. Josh Richardson led the team with six assists in his return to Miami, and Zach Collins pulled down eight boards.

The Spurs were incredibly efficient against the Heat, connecting on 53 percent of their shots from the floor. When they didn’t score on the initial attempt, they were able to get to the free throw line thanks to an aggressive approach in the paint. San Antonio took 31 shots from the charity stripe, three more than the Heat. They further converted on 77 percent of those shots, totaling 24 points, with 14 of them coming in the clutch in the fourth quarter. Tre Jones was able to make a pair within the final second to put the game out of reach.

One of the best performances of the night for San Antonio came was Romeo Langford who set a new career-high with 19 points. Langford, one of the pieces to come over in the Derrick White trade last February, took his opportunity in the starting five and ran with it. He was all over the stat sheet with six rebounds, a blocked shot, and a perfect steal for a scoop and score. Off the bench, the return of Doug McDermott continues to have an impact. The sharpshooter scored 13 points, connecting on three of his five attempts from deep.

It wasn’t all good for the Spurs, as the 18 turnovers were a problem again, nearly costing them the game. The worst one came with the game on the line and San Antonio needing to inbound the ball to protect the lead. After head coach Gregg Popovich burned his final two timeouts to give his guys multiple attempts to get it in, his team failed and ultimately the ball went back to Miami without an inbound.

Miami Went for the Win and It Cost Them

Miami entered Saturday’s game as an 11-point favorite at the betting window, expected to win without a problem. Through three quarters, the contest was closer than expected, but the Heat still seemed poised to pull away in the final frame. They had connected on 49 percent of their shots and were hitting 40 percent from beyond the arc. Sloppy play, however, put the Spurs at the free throw line early and often. Still, the Heat were able to keep it close, battling with San Antonio in a back-and-forth affair.

With the ball and nine seconds left on the clock after the Spurs’ turnover, Miami had a number of attempts to get a good shot off. The first shot came from Tyler Herro who missed from deep. Adebayo got the rebound with five seconds, a relatively clear lane to the basket, and a chance to tie the game. Instead, he kicked the ball out to Caleb Martin who missed on his three-point attempt. Had Adebayo attempted to score, it wouldn’t be a stretch of the mind to think that the Heat would’ve overcome the young San Antonio squad in extra minutes.

Up Next for the San Antonio Spurs

The Spurs head back to San Antonio on Saturday night and will have a day before playing host to the Cleveland Cavaliers on Monday night. A top team in the Eastern Conference, Cleveland (16-10) has a home game against the Oklahoma City Thunder before they make their way to the Alamo City. Going into the game with the Thunder, the Cavs are 3-2 in their last five, falling to the New York Knicks and the Sacramento Kings.

Cleveland is battling recent injuries to Donovan Mitchell and Kevin Love who are out for the game against Oklahoma City. San Antonio will have a better chance to extend their winning streak if the Cavs’ stars have to miss Monday’s contest. Still, Jarrett Allen and Darius Garland aren’t going to let their team go down without a fight.

All stats are from NBA.com.