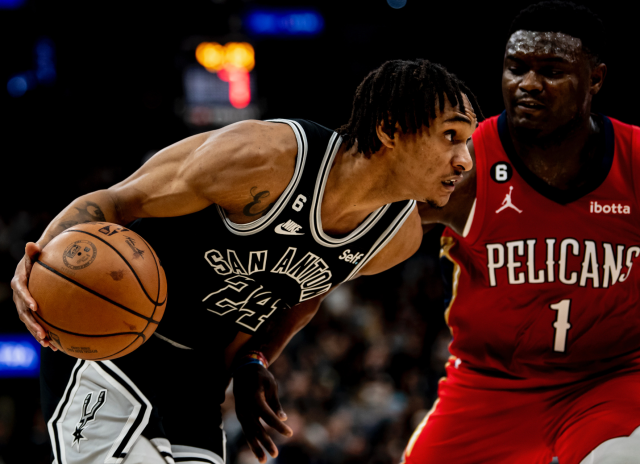 The losing continued for San Antonio Spurs on Friday night as they fell to the New Orleans Pelicans 117-99. Zion Williamson continued to showcase the talent that made him the top pick in the 2019 NBA Draft. He scored a game-high 30 points in a dominant performance. For the home team, Keldon Johnson, who was taken 28 picks after Williamson, continued to struggle from the floor. Johnson wasn’t alone, however, as the Spurs looked overwhelmed altogether in the second half on the way to their 10th consecutive loss.

San Antonio (6-17) was paced early by Johnson and Devin Vassell, the team’s top two scorers this season. In fact, the Spurs trailed by just two points after the opening frame. With 16 first-half points from Vassell, the silver and black led by three points after 24 minutes, 52-49. Things really fell apart after the half, however, as Williamson took over. He scored 15 points in the third quarter, giving him his game total, matching his first-half production. San Antonio, on the other hand, couldn’t get much of anything to go in the basket. They were outscored by 13 points, creating a separation they ultimately couldn’t overcome.

For the sixth time in the last seven games, the Spurs shot below 30 percent from beyond the arc. Johnson hit just one of his eight attempts from deep and Zach Collins missed all five of his attempts. Role players Keita Bates-Diop and Charles Bassey were the most consistent offensive performers for San Antonio. They recorded 10 and 11 points respectively. Continuing to provide excellent support as a two-way contract player, Bassey led the Spurs on the boards. He pulled down nine rebounds, nearly recording a double-double.

Outside of Collins and Johnson, the rest of the Spurs had relatively decent nights. Five players scored in the double digits, led by Vassell with 25 points. While Tre Jones didn’t have a good shooting performance, but he stuffed the stat sheet elsewhere. The former Duke guard had a game-high nine assists, and grabbed five rebounds as well.

Overall, the continued absence of Jakob Poeltl was noticeable on both ends of the floor. Veteran players Josh Richardson and Doug McDermott were also sorely missed, particularly their production from beyond the arc. Bates-Diop filled in well for rookie Jeremy Sochan and could take on a bigger role as the team continues to end its losing streak.

The Role Players Were Strong for the New Orleans Pelicans

Williamson’s 30 points were on brand for the budding superstar, but the real heroes of the night for the Pelicans (14-8) were the role players. CJ McCollum had a horrible shooting night (18 percent) and without Brandon Ingram, others needed to step up and did. Trey Murphy III, Naji Marshall, and Jose Alvarado had great nights picking up the slack offensively and defensively. Each of them had a pair of steals and shot 40 percent or better from the floor. Leading by 10 entering the fourth quarter, the trio of Murphy, Marshall, and Alvarado propelled New Orleans to the 18-point victory.

The Pelicans’ win can’t be discussed without mentioning the performance from center Jonas Valanciunas. His 21 points trailed only Williamson on the team, as did his 11 rebounds. On the night, Valanciunas missed just three shots, one of which was from beyond the arc. With no Poeltl for the Spurs, he and Willamson were physical in the post and earned free baskets via the free-throw line. New Orleans outscored San Antonio by 13 at the charity stripe with 10 more attempts, proving to be a crucial element of the score differential.

Up Next for the San Antonio Spurs

The Spurs get right back to action on Sunday night as they host the Phoenix Suns (15-7), the top team in the Western Conference. Devin Booker is sixth in the league in scoring (29.5 ppg) and coming off a 41-point night on Friday in a loss to the Houston Rockets. Deandre Ayton, however, will be looking to rebound from a rough eight-point performance of his own, while Mikal Bridges and Cameron Payne are sure to continue to provide excellent support in the starting rotation.

San Antonio’s key to beating Phoenix will be to find their perimeter defense. The Suns are fifth in the NBA shooting 37.9 percent from beyond the arc. That doesn’t bode well for the Spurs who are allowing teams to average 39 percent on them from three-point range this season, good for the worst mark in the league.

Phoenix also brings a familiar face with them in Jock Landale who spent last season with San Antonio. He was traded to the Atlanta Hawks over the summer along with Dejounte Murray but was released shortly after and signed by the Suns.