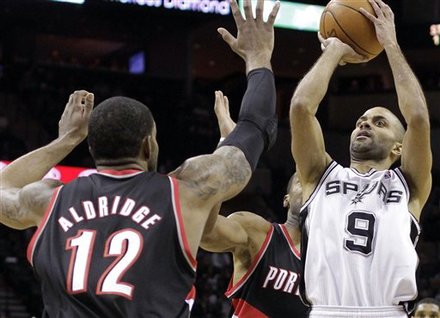 The San Antonio Spurs used a fourth quarter surge, lead by Kawhi Leonard and Tony Parker, to stay a perfect 8-0 at the AT&T Center with a 99-83 win over the Portland Trail Blazers..

After playing catchup for a majority of the first two quarters, including two 5-0 runs by the Portland Trail Blazers in the first quarter, the Spurs minimized their turnovers after a sloppy first quarter and managed to enter halftime ahead by three points.

As has been the case since Manu Ginobili was injured, several Spurs players found ways to contribute, with Tiago Splitter scoring nine points in the third quarter, and Parker and Leonard pacing the Spurs in the fourth. Danny Green also contributed on both ends of the floor throughout the second half.

“The Blazers have yet to prove themselves on the road . It will be a tough contest , for sure, but I think they can eek a victory. Aldridge, Wallace, Batum, and at least one of the guards will have to play well for the Blazers to win. “

In Paul Garcia’s game preview, he talked about the Spurs needing good performances from four players in order to have a chance at beating Portland.

The Spurs will not only need another big night from Parker and Duncan, but they will need someone to put on the Ginobili-cape and then someone else to be the fourth phantom Spur. Will it be Blair, Jefferson, or Leonard from the starting lineup? Or could it be someone off the bench like Green, Neal, Bonner, or Splitter? Parker, Leonard, Splitter and Danny Green ended up carrying the load for the Spurs in their 99-83 win.

“It was a tough loss. We had control of both halves and then we just let it slip away. It wasn’t even their starters tonight. Their second unit came in tonight and played big for them. They put pressure on us, crashed the boards hard and they just had more energy than us tonight. We had control, we just didn’t stay solid.”

Kawhi Leonard, who has been drawing comparisons to former Spur Bruce Bowen, finished the game with 11 points (9 in the fourth quarter), five rebounds and two steals.

Cory Joseph played just over two minutes at the end of the fourth quarter, scoring two points on a drive into the paint.

Danny Green had another standout night (13 points, six rebounds, three blocked shots) and has strung together several key performances since Manu Gonobili injured his shooting hand. After finishing with eight points and two blocks in only 16 minutes in the Spurs’ first game without Ginobili, Green has seen a steady increase in playing time and has taken over James Anderson’s role off the bench. The Spurs are also now calling plays for Green and he has yet to disappoint.

Excluding Milwaukee’s game (5 minutes), Green has averaged 10.6 points, five rebounds, 2.1 assists and 1.6 blocks per game in the last six games. While role and playing time could change in a whim, Green seems to have earned his teammates’ and coaches’ confidence.

Green is definitely a watch “lister,” but if you need help in several categories, Green may be just the under-the-radar pickup you need.